My hometown of Evansville, Indiana is a little over 900 miles from where Hurricane Ike went ashore in Texas. So, it was a little surprising when we were hit with 50-plus MPH winds for over 6 hours yesterday. Ike (what was left of it) slammed us and knocked out power to about 70% of the area. 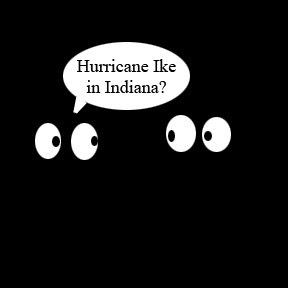 With no electricity, we lit a few candles and spent a quiet evening reading by candlelight (as romantic as that sounds, candlelight is hell on the eyes. Thank goodness for electricity).
I choose a short book by Robert Mankoff, cartoon editor of The New Yorker magazine.

Here are a few notes that I though all creative Knights might enjoy:

The problem with many artists and writers is that they get a new idea, then they like to take a year or so to perfect it, and then a few more years to ruin it. Cartooning is idea creating in overdrive!

It's not the ink, it's the think. "A little more inking and a lot more thinking."

There is no reality testing in cartoons, because the mind is creating its own reality. In cartooning, the mind changes what isn't into what is.

Collect ideas from everywhere all the time. Getting ideas is like getting a loan. If you already have money, it's easy to get more.

The basic process is: change something, then change it again, and again and...

Creating is dreaming while you're awake -- making new things out of old.

The journey of creativity is on in which you know where you're going only when you get there.

The game is a mind game. That's the only place it can happen because ideas occur only in one place -- year head.

Facts are boring. The truth is too restrictive. Lying is very creative. The bigger the lie, the better the cartoon.

It's the clash of the ordinary with the extraordinary. Imagine the real and then create your own new reality.

So, here's to getting sidetracked and creating something great this week.

Sir Bowie "usually in the dark" of Greenbriar

Sir Bowie "usually in the dark" of Greenbriar
Posted by dkWells