The Real Race and Sex Sells in America: The Story of the Swift Boat from Alaska 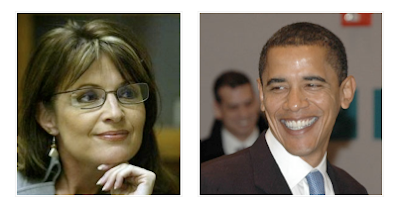 I have tried to remain calm and detached the past few weeks concerning the status of our political season and choice for President; however, I am growing tired of emails, mostly from my conservative friends who are good people but seemed to be confused about who is running for President.

Or, are they? It seems that John McCain and the Republican status quo have decided that they should make the race between Palin and Obama. Let's face it, there is nothing sexy about John McCain! Even Cindy is losing her blond bombshell ways.
So, how do you dismantle an atomic bomb in the form of a charismatic black/white American male? You bring in the white bombshell sexy librarian-looking Governor! You see the real race is about race (black and white), sex (male and female) and what's sexy (the only thing that really matters in American culture)!
I am sure that Palin has much more than her looks to bring to the table, but so does Obama. This year's "Swift Boat" Republican tactic is sailing down from Alaska. So what does Palin really think about Obama? You'll find her support of him before her selection as the Republican VP candidate in the following article from the New Yorker interesting:

Before she was running against him, Sarah Palin—the governor of Alaska and now the Republican candidate for Vice-President of the United States—thought it was pretty neat that Barack Obama was edging ahead of John McCain in her usually solidly red state. After all, she said, Obama’s campaign was using the same sort of language that she had in her gubernatorial race. “The theme of our campaign was ‘new energy,’ ” she said recently. “It was no more status quo, no more politics as usual, it was all about change. So then to see that Obama—literally, part of his campaign uses those themes, even, new energy, change, all that, I think, O.K., well, we were a little bit ahead on that.” She also noted, “Something’s kind of changing here in Alaska, too, for being such a red state on the Presidential level. Obama’s doing just fine in polls up here, which is kind of wigging people out, because they’re saying, ‘This hasn’t happened for decades that in polls the D’ ”—the Democratic candidate—“ ‘is doing just fine.’ To me, that’s indicative, too. It’s the no-more-status-quo, it’s change.”

This was two weeks ago, at the statehouse in Juneau. After persistent reports, in July, that Palin was on McCain’s short list of potential running mates, her name had faded back into obscurity. Nobody in Alaska seemed to take her seriously as a national prospect, and she had shrugged the whole thing off on television, telling CNBC’s Larry Kudlow that, before considering the job, she would want to know “what is it, exactly, that the V.P. does every day.” Now, at the statehouse, she sat, unattended by aides, curled up in a cardigan, and explained that what she had done every day since becoming governor was to stick her thumb in the eye of Alaska’s Republican Party establishment. “The G.O.P. leader of the state—we haven’t spoken since I got elected,” she said.

She went on, “I guess if you take the individual issues, two that I believe would be benchmarks showing whether you’re a hard-core Republican conservative or not, would be: I’m a lifetime member of the N.R.A.—but this is Alaska, who isn’t?—and I am pro-life, absolutely.” She continued, “I guess that puts me in a box of being hard-core Republican.” But she said she recognized that “the Democrats also preach individual freedoms and individual rights, capitalism, free market, let-it-do-its-thing-best, let people keep as much of their money that they earn as possible. And when it comes to, like, the Party machine, no one will accuse me of being partisan.”

So the possibility that Obama might win Alaska did not worry Palin: “Turning maybe purple in the state means, to me, it’s more independent, it’s not the obsessive partisanship that gets in the way of doing what’s right for this state, and I think on a national level that’s what we’re gonna see.” And she added, “That’s why McCain is the candidate for the G.O.P.—because he’s been known as the maverick, as the conduit for some change.” In the state’s Republican caucus, McCain came in fourth, trailing Ron Paul. “I always looked at Senator McCain just as a Joe Blow public member, looking from the outside in,” she said. “He’s been buttin’ heads with Republicans for years, and that’s a healthy place to be.” Then again, on McCain’s signature issue—the prosecution of the war in Iraq—she did not sound so gung-ho. Her son is a soldier, and she said, “I’m a mom, and my son is going to get deployed in September, and we better have a real clear plan for this war. And it better not have to do with oil and dependence on foreign energy.” ♦

My mind was made up about Obama when I read his book two years ago. This is a man who understands his fellow human beings, himself and our future. Today, I am having more trouble trying to decide if I should start Tony Romo or Aaron Rodgers as my quarterback in my fantasy football game than who I should vote for for President!
Nice try my contradictory neocon friends, but I'm not sailing on this swift boat to Alaska!
Sir Hook the Registered Republican Liberal Moderate I Love a Librarian But Will Vote for Obama of Warrick

P.S. Palin vs. Hillary, now there's a race we can all look forward to in the future. I would love to have the rights for that pay-per-view smack down!
Posted by dkWells