I was going to write about this, but I figured that you wouldn’t believe me. So, I’ve included an edited version of a story that appeared in the Los Angeles Times (edited for space).

Vaune Dillmann took on federal regulators this year when they ordered his Mt. Shasta Brewing Co. in the Northern California town of Weed to stop topping beer bottles with caps bearing the play on words, "Try Legal Weed." 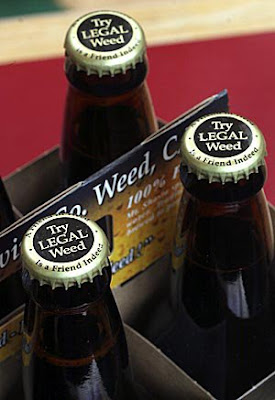 A plain-talking 61-year-old former cop, Dillmann refused to back down, and his high-spirited appeal drew widespread media attention as well as support from beer lovers and civil libertarians far and wide.
Now, facing a storm of bad publicity and the prospect of a drawn-out court battle, authorities at the federal Alcohol and Tobacco Tax and Trade Bureau have quietly reversed course. The agency finalized approval of Dillmann's controversial cap Thursday.
"They acted like Big Brother. They said I was guilty of a thought crime," Dillmann said of his six-month battle with the authorities. "But it's over. Weed fought the law, and Weed won!"

Art Resnick, an agency spokesman, said the switch in stance demonstrates the due process in the agency's appeal process, adding that "the system worked as it should."
Federal regulators, he said, "pride ourselves in working with industry members. We are not in the business of putting anyone out of business."

In fact, sales of Dillmann's brews have doubled in the six months since the controversy began. Dillmann said his small brewery -- located in the morning shadow of Mt. Shasta, just across Interstate 5 from downtown Weed -- now has to play catch-up just to fill all the orders.

Sir Knights, this Weed’s for you!