Is Your New Year Half Empty or Half Full?

Lady Allwinky and me enjoyed ushering in the New Year at the Portofino Bay Resort at Universal in Orlando with thousands of International revelers.  We heard more French, German, Italian and Spanish spoken than English, so you had to remind yourself that you were still in America. 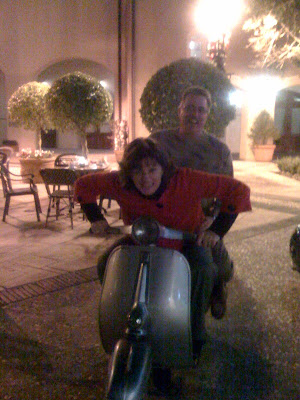 A much more common language being spoken by all was the complaining about how the economy and markets were depleting their wealth.  I was in the Steam Room at the Spa after enjoying a couples massage when a Jewish businessman from Philadelphia asked me if I knew how the markets ended.  I told him that I stopped watching it, preferring to stay focused on things I can control (at least believing in the illusion).  He said, "The economy is so bad that Jewish women are marrying for love instead of money."  I responded with, "So what's so bad about that?"  I also reminded him that if he thought things were so bad why was he staying in a five star resort, sitting in a Spa Steam Room on New Year's Eve?!
Is your New Year half empty or half full?  One man's trash is another man's treasure.  Most of my friends see the current economic climate as half empty.  I see a world of opportunity!  I already have come up with two ideas to grow my business and my personal financial situation by focusing on opportunities instead of drawing back into a defensive posture.
Leaving the resort another man in the elevator said, " I don't have a 401K anymore, I have a 201K."  I smiled and thought to myself, think lack, get lack...think abundance, get abundance.  I think this year I'll invent the 801K!
Is your New Year half empty or half full?
Sir Hook the Norman Vincent Peale of Warrick
Posted by dkWells