Year of the Horse?

Yesterday was officially a day of rest and watching football for many of us here in the U.S. The “Granddaddy of Them All” is the Rose Bowl Game (95 years strong).

Before the game is one of the most spectacular events in the world: The Rose Parade in Pasadena, CA. 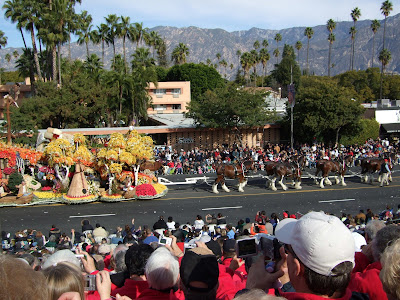 The Tournament of Roses Parade was founded in 1890, staged and sponsored by Pasadena's recently-formed Valley Hunt Club. The main idea behind the parade was for these new Californians to showcase their state's mild winter weather, a place where flowers bloomed all year long, in stark contrast to the places they left in the East and Midwest.

The parade floats “bloomed” into some of the most spectacular, jaw dropping creations on earth. One company that has been represented for over 50 years is our good friends Anheuser-Busch. Here is a brief history of their involvement and their famous Glydesdales. 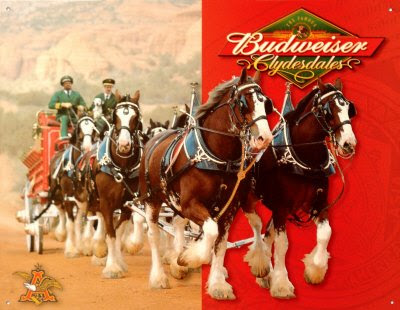 ST. LOUIS (Dec. 17, 2008) — The Budweiser Clydesdales, a Tournament of Roses Parade tradition for 56 years, are celebrating another milestone — 75 years as the symbol of Anheuser-Busch and an American icon. The Clydesdales will pull the "City of St. Louis" float, "Seventy-Five Years of Entertainment," in the 120th Rose Parade themed "Hats Off to Entertainment" on New Year's Day.

The Clydesdales became part of Anheuser-Busch in 1933, shortly after Prohibition ended for beer, when August A. Busch Jr. and Adolphus Busch III presented a hitch to their father, August Busch Sr., to commemorate the first bottle of post-Prohibition beer brewed in St. Louis. 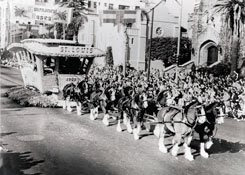 "The Rose Parade is especially significant for us this year as we celebrate the 75th anniversary of the Budweiser Clydesdales, which are beloved by millions in the United States and around the world," said Kathy Flanigan Busch O'Kane, co-producer of the "City of St. Louis" float. "The Clydesdales are not only part of the heritage of Anheuser-Busch, but they have also been part of the entertainment tradition of the parade for the past 56 years."

"The introduction of the Budweiser Clydesdales in 1933 symbolized a national return to optimism," said Karen Flanigan Busch Buhl, co-producer of the "City of St. Louis" float. "Today, the Clydesdales still captivate crowds from coast to coast as a vision of majesty, teamwork and above all, quality."

The float also celebrates the anniversary of another St. Louis institution and National Historic Landmark, the Missouri Botanical Garden. The Garden is the oldest of its kind in the United States and will celebrate its 150th anniversary in 2009. The float features the façade of the Garden's Linnean House, which was built in 1882 and is the oldest continuously operating public greenhouse west of the Mississippi River. The float also depicts the Garden's popular giant water lilies and "fountain" featuring water created with light and dark irises and lavender statice. Garden founder Henry Shaw is also depicted on the float feeding an apple to a young Clydesdale. "This year's float offers a historic look at St. Louis through two of its icons, the Budweiser Clydesdales and the Missouri Botanical Garden," Lofthouse said. "It combines the best of decorating opportunities in both dry and fresh flowers while depicting a piece of American history for all to appreciate."

The company is a wholly-owned subsidiary of Anheuser-Busch InBev, the leading global brewer, and continues to operate under the Anheuser-Busch name and logo. For more information, visit www.anheuser-busch.com (end)