Well, I'll Be a Monkey's Uncle 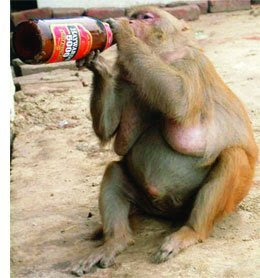 Seeing as our lively debates have got us up on to our hind legs :)) and seeing also as this week the UK is going very big on the fact that it is 150 years since Darwin published his "Origin of Species", with the attendant airwaves and blogs, daily thick with comment from all sectors of the rainbow; creationists, ID, Evolutionists, Darwinists, I thought before we got back to some Beer Blogs...that I would pitch the subject into the KMSA and hopefully watch it bounce around for a while, possibly while drinking a nice ruby porter.

I received two comments recently from friends, both posing the same objection to Darwinian evolution:
*"you are a person of great faith to believe that everything exists at random."
*"Are you going to tell me that you actually believe that 'everything' came into being out of random molecules coming together in just the right way to make YOU? It takes lots more guts to believe that than it takes to believe in God."

Now it is extremely dumb to think that the flu virus knows about the flu vaccine and is able to change its reproductory system to produce new vaccine-resistant offspring's. It doesn't -- the flu virus tries to reproduce in the only way it knows to (using DNA replication mechanism of the host to "replicate" itself into hundreds of different copies). During that process, minor errors in the DNA copying mechanism, rare and completely random, creates imperfect copies of the parent's DNA. These new slightly changed DNA's give rise to "new strains" of the flu virus. This part, "mutation", is the only random part of evolution.

After this, the virus's "nature" (the environment in which it thrives, i.e. the human body) kicks in with "natural selection". Viruses acquire "mutations" spontaneously or randomly. But all mutations are not favorable for survival, and hence those viruses that acquire unfavourable mutations are lost.

Only the virues that acquire favourable mutations are the "fittest" to survive (Darwin's "survival of the fittest"). Since generation time of viruses (hundreds can be produced simultaneously) are small and the populations large, they can fill up the lost pool in double quick time. Thus, natural selection is not random. The only "new strains" that *might* survive this natural selection are those that neither the body's inbuilt defences, nor the vaccine, could eliminate.

The two very important things to understand here are:
*Mutations are random, aimless, without any purpose, and without any control.
*Natural selection is completely non-random. It is the result of systematic application of non-random natural laws to filter out the incompatible mutations.
*If only random variations were responsible for evolution, the sheer amount of possibilities would be staggeringly large, thus making evolution statistically impossible -- the "tornado blowing through a junkyard could not assemble a 747 airliner" argument.

Not surprisingly this is used as a prominent critique of evolution by creationists. The problem here is the same as above, i.e. not understanding (or deliberately ignoring) the role of natural selection in evolution. Suppose our flu virus could mutate in 10 new variations. If all 10 of these mutate 10 times again, then we have 10 x 10 = 100 variations after the second step. But if natural selection chooses only 2 of the first 10 mutations for survival, and eliminates the rest, then the 2 selected variations would go on to produce only 2 x 10 = 20 variations after the second step, instead of 100 that would have been produced by randomness without natural selection.

Unfortunately, while natural selection provides an answer to why evolution is not a statistical impossibility, it produces the illusion of design, i.e. as if it is working towards a goal of achieving a final "fittest" form. That is not the case because to work towards a "fittest" form with advance knowledge of the final goal, the mutations would have to be controlled to supply the necessary "parts" that natural selection would "assemble" to form the "747 airliner". Mutations are however random, and natural selection simply keeps the fit mutations while eliminating the unfit mutations from what it gets to choose from, and the end result just turns up, completely unplanned.

Because it can be observed, not many people dispute that the flu virus evolves this way. It is also easy to comprehend that given a few years, perhaps a few decades or a century, the surviving "new strains" accumulate enough tiny changes to look substantially different from what the parent virus used to be.

But it is much harder to comprehend that fishes could accumulate enough small changes to evolve into dinosaurs and birds, or even the relatively shorter very unpalatable evolution of apes to human. It is a problem we have with scale. It is the same problem we face when we, used to seeing a few thousand dollars in our banks, try to imagine the amount of money Bill Gates has.

It is the same problem we face when we, used to walk a maximum of a few miles a day, try to imagine what it would be to walk across America, across the Atlantic, across all of Europe, all the way to Baghdad. It is the problem that we face when we, used to experience time in the scale of minutes, hours, days, years, and at best a lifetime, try to imagine just how much time 4.5 BILLION years is. Try to comprehend this: If one whole lifetime (100 years) is like walking a mile, then the amount of time that evolution had is not just like walking all the way from California to Baghdad -- it is like walking to the moon, and back, a hundred times over!

And again...... if a hundred years is like walking a mile, then evolution walked all the way to the moon and back a hundred times over!

Once we get a feel of the enormity of the amount of time involved in evolution, it is not as difficult to comprehend how small changes can accumulate through all that enormous length of time to produce elephants from the first self-replicating molecules.

It is also very important to understand that if, at various stages of this stupendously long evolutionary process, the random mutations had been different, or if the earth's environmental history was different (resulting in different sieves of natural selection), things very different from elephants, birds, or humans would be roaming the world today, if at all.

Sir Dayvd ( you've all heard way too much from me, simply because the three big jobs i had this early week, all got delayed, so the rest of this week, i will be back to my taciturn self... as i try and catch up ) Of Oxfordshire
Posted by dkWells