I'm sure I'm not the only Knight, who lays on his sofa some nights and watches the TV, and thinks that this world may indeed be a beautifully created place... but just look at those humans, both Heaven and Hell bent on trashing it.

I say Heaven too, because as we have noted many times in these pages, theology, meta-physics, or what you want to call it has an awful lot to answer for.

On Friday Night there was the second part of the "80 Faiths" series with everyone thinking they have the answer......

Then tonight, after the TV News, ( during which i got up to make a cup of tea, while one set of Middle Eastern people fired Phosphorus fireworks onto another set of almost identical looking set of Middle Eastern people, sharing an almost identical bit of scrubby,parched desert rock ) I settle back to watch the first part of the "History of Christianity".

Immediately i'm shown scenes that would not look out of place on the KMSA's Favorite show; Monty Pythons, when video pictures from Jerusalem's Old City, show Christian clergymen fighting inside the Church of the Holy Sepulchre. Viewers watched, I dare say, in amusement as Monks with flowing beards and gowns tried to beat each other senseless right next to the spot where Jesus is revered to have risen from the dead. It made for great, if depressing, television.

But smirking apart, disagreement between the Christian groups - Greek Orthodox, Franciscans and Armenian Orthodox - is a serious business in the Holy Land. Friction arises because while the groups share guardianship of the Christian holy places such as the Sepulchre and the site of Jesus's birth, the Church of the Nativity, in Bethlehem, they have never really worked out exactly how to divide responsibilities.

This friction has been going on a long time and by that I mean a very long time, ie: 500 years or so. It got so bad back in 1852 the then rulers of the Holy Land, the Ottomans, issued a decree that froze things as they were and forbade anyone from changing them. The so-called ''Status Quo'' agreement basically meant that, for example, if the Armenians have always had responsibility to clean the windows then they must clean the windows but they must not move the ladder below the windows because ladder moving has always been done by the Greeks.

One of these ladders, high up on its ledge, was photographed in 1892, and also recently in its unmoved state. 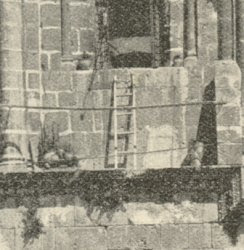 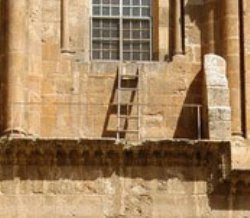 (I'm tempted to say, looking at the two pics, that it has been moved, but i don't want to start a war, by pushing the issue )

The same goes for weather damage to the roof the Church of the Nativity. This has meant worshippers in recent years had to use umbrellas inside the church whenever it rained, so bad were the leaks, but the committee still failed to agree on how to make satisfactory repairs.

Various leading archaeologists and scholars visited the church and produced reports about the importance of immediate reparations to one of the oldest and most precious Christian shrines. But still the committee does not agree, and of course, one day soon, the whole lot of it will fall about their stupid ears, and they will have nothing to lay around in the hot sun all day , guarding.

So you have to say to yourself, if sets of people who are meant to be part of a sharing, uplifting Jewish based religion, that was invented by St Paul, because H Christ hadn't finished the job off properly in the first place, are behaving in such a way, then what hope is there for the rest of us.....

We could of course start a brand new KMSA Religion, religion #81, where apart from maybe not being able to covert another man's wife ...anything goes. Except I'm not moving off this sofa unless i get to guard the Beer.