Praise Song For The Day

Did I miss something yesterday?

I opened the paper this morning and see that -- while stuck in my office yesterday -- I missed seeing a black hand on the Lincoln Bible. 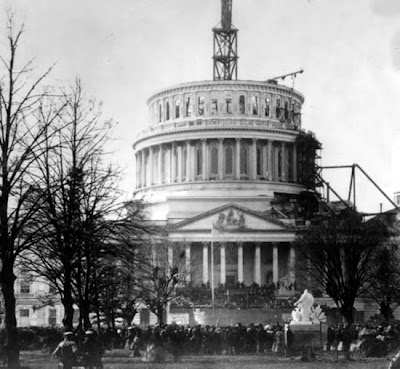 I missed the swearing in of Barack Obama, 44th President of the United States. I missed one of the most inspiring and challenging inauguration speeches ever given. I missed the images of countless faces weeping with joy. And, not to trivialize any of that, I also missed a short poem written and shared by Elizabeth Alexander, a professor at Yale University. A poem commissioned by Barack Obama.

"Obama hasn't commissioned a poem so much as he's commissioned someone to make the moment mean something bigger than ceremony or political poses," said Todd Boss, a St. Paul poet. "To poets, and to those who draw meaning from poetry, the only real shock is that this kind of thing doesn't happen more often."

How often? A quick internet search reveals that Alexander is only the fourth poet to read at an inauguration, following Robert Frost in 1961, Maya Angelou in 1993 and Miller Williams in 1997. 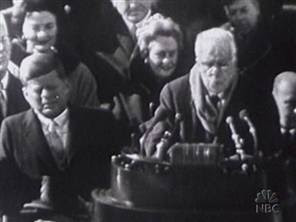 
It got me thinking, Why do we even write poetry? 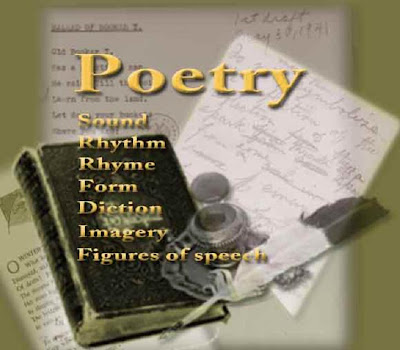 What compels someone (including many of you Knights of MSA) to arrange their thoughts in words (poems and song lyrics) that have form and rhythm? And why does this shift from sentences to stanzas heighten a moment or an emotion?

From an article By KIM ODE, Star Tribune (Minnesota) Edited for Length:

“People have been making poetry for thousands of years -- the word poem is from the Greek for "a thing made" -- long before words were put to stone, much less paper. We tend to think of a poem as art, but its genesis in fact was as a device, as a way to tell a story using cadences and rhymes that made it easier to remember, and so to be passed along.”

Obama himself had a few poems published in the student literary journal of Occidental College in 1981. "He's got the attitude of a poet, which is a large part of his success," Minneapolis poet Tim Nolan said. "When he's giving a speech, he's very particular about his choice of words."

And again arises a comparison with Abraham Lincoln, who also had some poems published. Granted, Nolan said, "they weren't very good. But when you think of the Gettysburg Address ..."

"Even though people are afraid of poetry in some funny way, as something beyond them, it's also the most democratic of forms," said St. Paul poet Phebe Hanson. “Most of us have tried to write a poem, she said, whether for a tribute… or for working through a trying moment.”

But it's no less important -- and perhaps more so -- to read poetry. We all need to do our part, for as Walt Whitman once observed: "To have great poetry, there must be great audiences, too." (end)

Elizabeth Alexander was asked: How did it feel to be asked by Obama to play such an important role in the Inauguration? Alexander: “Overwhelming, humbling, joyful. So many of my poet friends and I were hoping that he would decide to have a poem at the Inaugural, because we felt that it would be a signal of his own evident value of the possibilities of language. What we have is his understanding that the arts do have a place in day-to-day life, that poetry can still us — that is, let us pause for a moment and, as we contemplate that careful, careful language, hopefully see situations anew, from a different angle. That's so much of what art and poetry offer. I think that he is showing that moments of pause and contemplation in the midst of grand occasion and everyday life are necessary. To have that affirmed by the President-elect has really been an exciting thing for poets.”

Yes, I missed something yesterday. A short poem written by a poet not afraid to express herself. Here it is: 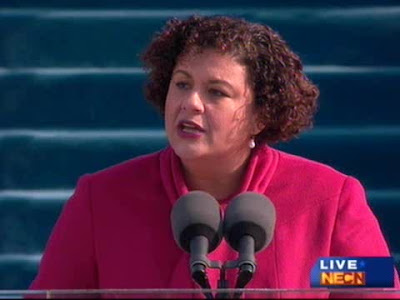 Praise song for the day.

Each day we go about our business, walking past each other, catching each others’ eyes or not, about to speak or speaking. All about us is noise. All about us is noise and bramble, thorn and din, each one of our ancestors on our tongues. Someone is stitching up a hem, darning a hole in a uniform, patching a tire, repairing the things in need of repair.

Someone is trying to make music somewhere with a pair of wooden spoons on an oil drum with cello, boom box, harmonica, voice.

A woman and her son wait for the bus.

A farmer consider the changing sky; A teacher says, “Take out your pencils. Begin.”

We encounter each other in words, Words spiny or smooth, whispered or declaimed; Words to consider, reconsider.

We cross dirt roads and highways that mark the will of someone and then others who said, “I need to see what’s on the other side; I know there’s something better down the road.”

We need to find a place where we are safe; We walk into that which we cannot yet see.

Say it plain, that many have died for this day. Sing the names of the dead who brought us here, who laid the train tracks, raised the bridges, picked the cotton and the lettuce, built brick by brick the glittering edifices they would then keep clean and work inside of.

Some live by “Love thy neighbor as thy self.”

Others by first do no harm, or take no more than you need.

What if the mightiest word is love, love beyond marital, filial, national. Love that casts a widening pool of light. Love with no need to preempt grievance.

In today’s sharp sparkle, this winter air, anything can be made, any sentence begun.

On the brink, on the brim, on the cusp -- praise song for walking forward in that light.