Today in the USA, it is known as Veteran's Day; however, when I was but a wee lad on the lap of my Grandfather Baker, a WWI Vet, it was known as Armistice Day. 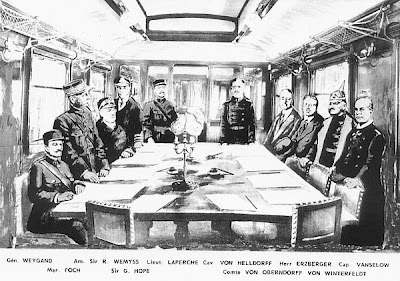 Today, the 11th day of the 11th month, on the 11th hour, the Armistice was signed in a railroad car to cease "The War to End All Wars". A bold, and later on, a false claim. That very same railroad car was the scene of the surrender of France to Germany in WWII.
I didn't get my Grandfather Baker to talk too much about his experience in the trenches in the Argon Forest. As a history buff, I read of the horrific accounts: rats feasting on the dead next to you but you can't move for risk of death, the mustard gas attacks, hours of shelling, running across the killing zone, etc.
His first story was about an Italian soldier who shared the same trench next to my G-Dad's unit. His name was Luigi, and he had a golden tooth that shined when he smiled. My Grandfather saw Luigi get shot in the head. 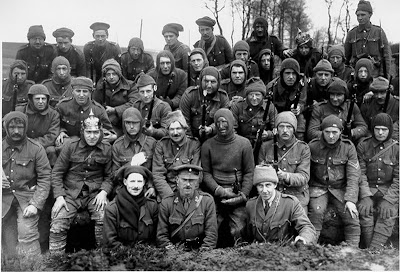 The second story was how at 11am on 11/11/1918 the troops once again heard the whistle to climb the trenches and advance across the killing zone known as "No Mans Land"...but this time it was to greet the enemy and celebrate the fact that they were now the lucky few survivors of a truly horrific war.
Germans, English, French, Belgians, Poles, Italians, all hugging, crying, laughing, drinking, smoking and showing pictures of their loved ones to each other. Simply celebrating life and being alive! He said it was the best day of his life! 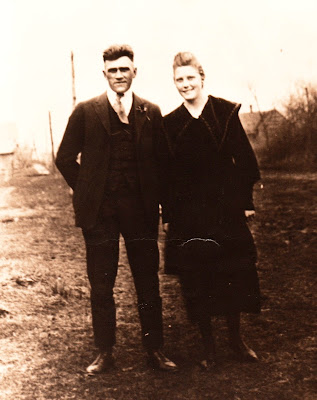 John Thomas Baker married Edna Lilly Tunnel (My Grandparents) a year later in 1919. This is their wedding picture outside the homelands of Sims, Illinois. 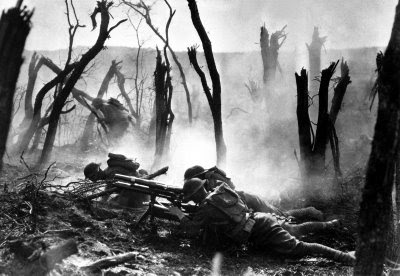 So today, remember all who have died for, or served your country, and on the 11th hour raise a toast to those who are no longer, the survivors of the War to End All Wars.
Sir Hook the Proud Grandson of John T Baker of Warrick
Posted by dkWells