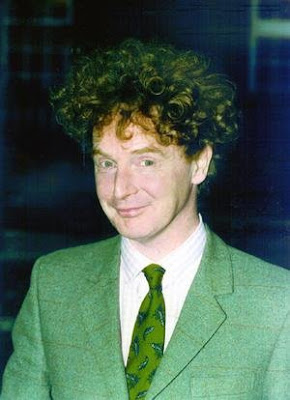 1946 ~ 2010
There are not many people who I have been slightly envious of, but Malcolm McLaren, was one of them. For 35 years now I too have tilted at the same bourgeois windmills he so mischievously rode against...but I have found it takes an extra level of "give a damn" and confidence to change a society, which he literally did and whose legacy has made my life positvely heaven by doing it.
Malcolm concocted the Sex Pistols, yes. He also steered the New York Dolls toward their premature demise, brought hip-hop to London and nicked the drag-queen pose called voguing long before Madonna. The wily impresario, who died a couple of days ago at age 64 after a long bout with cancer, undoubtedly had his fingers in a lot of pies.

Rock-& Pop in the 21st century is Andy Warhol's version of artistry -- reproductions, distillations, provocation. McLaren saw it coming a long time ago. "Malcolm McLaren Invented Everything," blared the headline to a 2007 interview feature in Vice magazine. He surely appreciated the hyperbole.

If McLaren saw the Gaga world coming, it was because he worked in visual terms at least as much as musical. The co-proprietor with then-girlfriend Vivienne Westwood of an early-1970s London shop located on the Kings Road called Let It Rock, he kicked against the supposed ideals of the hippies -- "hippos," he called them -- by reintroducing the Edwardian fashions of the teddy boys of the 1950s, when rock 'n' roll in Britain was an anarchic reaction to the country's squalor and repression.

They soon renamed the shop Too Fast to Live Too Young to Die, which in turn became the bondage-gear boutique Sex 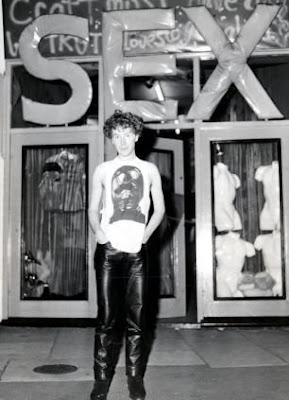 and, finally, Seditionaries, where McLaren delighted in the fact that the place was so derelict there were rats running around beneath the cash register. To Westwood's distress, McLaren had a habit of changing the store's theme just as its underground loyalists gave way to a wider, more mainstream clientele. "Whenever it started making money, I closed it down," he recalled.

Managing the New York Dolls, McLaren had an idea that the glammy prepunk band would provide a forum for debating "the politics of boredom," a subject the Sex Pistols, the Clash (managed by McLaren associate Bernie Rhodes) and countless other punks would soon adopt as their own. He claimed he brought a new, confrontational look back to London from New York, the ripped T-shirts of a New York scenester named Richard Hell, who would soon co-found the bands Television and the Voidoids.

The Sex Pistols, who famously auditioned Johnny Rotten in the Sex shop, where he sang along to Alice Cooper's 'I'm Eighteen' on the jukebox, brought McLaren his own taste of fame when he was arrested after organizing the group's infamous boat ride down the River Thames during the Queen's Silver Jubilee. In the fictionalized documentary 'The Great Rock 'n' Roll Swindle,' released in 1980, two years after the Sex Pistols' implosion, McLaren gleefully played himself as the "Embezzler," claiming a Svengali role which Rotten, who would successfully sue his former manager, has loudly disputed over the years.

"Frustration is one of the great things in art," McLaren once wrote in a college notebook. "Satisfaction is nothing." Though his greatest achievement, the agitpop Pistols project, flamed out like the celluloid in 'Inglourious Basterds,' McLaren was just lighting his match. Whatever his indescribable forte was, it was not sitting still.

In the early '80s, he created Bow Wow Wow installing 13-year-old Annabella Lwin as lead singer -- as a New Wave tribal-drum jump-rope crew, helped introduce hip-hop to London with his own 'Duck Rock' album (with artwork by Keith Haring), and dreamed up visual styles ranging from a pirate theme popularized by Adam and the Ants to the multilayered, bag-lady "Buffalo Gals" look named after his bubblegum hip-hop hit. He proposed himself as manager of the young Red Hot Chili Peppers, then backed out after seeing the band perform. He collaborated with Afrika Bambaataa, Bootsy Collins, Jeff Beck and Françoise Hardy.

In later years, he found other receptacles for his creative juices, threatening to run for mayor of London and co-producing the film version of 'Fast Food Nation.' And his own music, so often charmingly inept and pretentious, hung around: Eminem and the Coup were two of many rap acts who sampled his songs, and Quentin Tarantino, the music connoisseur, featured McLaren's 'About Her,' a woozy rip-off of the Zombies' 'She's Not There,' on the 'Kill Bill Vol. 2' soundtrack.
To many he was an infernal windbag and full of arrogance....but that as anybody who is involved in the Music Industry is an outsiders thumbnail sketch of everyone who manages bands, and largely a result of his voice which sounded supercilious, upper class and lazy in tone. He was anything But.
Transforming the fashion and art and music industry by potently combining all three as a fist against the woolly establishment, will never be emulated again, as the embers of it all are now an unshockable staid middleage..
The UK then was ripe for shocking in the seventies, and even tho we are now in the depths of Simon Cowell dominated dross, it will take an even bigger upheavel to shake that off, without someone sneering that its all been done before, by Malcolm McLaren.
He taught me you can only be first in life, everything needs that different twist......and even if you don't feel you have original creativity in your bones...you can combine other peoples originality, to create movement, or a Movement in life.. He was the great Conduit, the great delegator, instigator, ... in short he was to paraphrase the ex Pistols album title, The Bollocks, and I miss him already.
I was even moved just now to dig out the original punk T-shirt that I bought at SEX in the seventies and offer it up to my frame which now has a bit more timber on it than the skinny white boy who wandered the Kings Road looking for action. 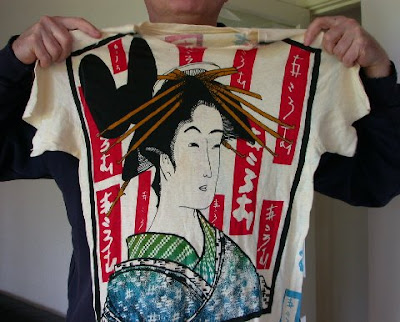 As of today, McLaren's otherwise empty homepage still says, "Malcolm will return shortly." For all we know, this master of pop orchestration may be just plotting his next move,
..............either way i'll be raising a toast to the Grandmaster Flash, when I am stood in front of a stage tonight with hell bent music blowing the froth off my pint.
Sir Dayvd of Oxfordshire
Posted by dkWells