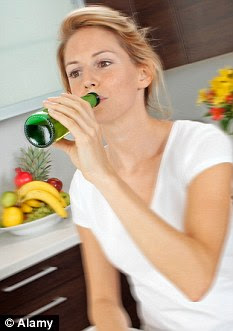 This is not an April the 1st joke. It may be, ahem, beerly believable for fans of a pint but it seems men have women to thank for their favourite tipple.
Jane Peyton, an author and historian, says the fairer sex are behind the popularity of beer, and have been involved in its production since brewing began between 7,000 and 9,000 years before Christ.
And in Britain, it was women in their role as homemakers who drove the beverage's popularity as a home brew in the Middle Ages.
Back then, drinking ale was more common than water for most people, even children, because water was often contaminated.
Only over the past 500 years have men started to muscle in on the act, when commercial breweries began to be set up and the product was taken out of the home.
Mrs Peyton said: 'For thousands of years women brewed beer. It was part of the daily diet and therefore part of a woman's domestic chores to produce.
'I can imagine it will come as a shock to many men, but they've got women to thank for their beer.
'It is only in comparatively recent times that men became involved in the brewing process.'
Known as brewsters, women brewed the vast majority of ale drunk in Britain until the 14th century.
In Britain today, only 13 per cent of women choose beer over other drinks, compared with 40 per cent on the Continent.
All this appears in the news on the same day I read that Guinness is trialling a black lager to tap into a growing segment of the lager market. 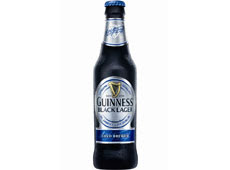 The drink — simply called Guinness Black Lager — offers consumers a new “refreshing lager” taste in comparison to the distinctive flavour of the traditional dry stout parent brand, as it is brewed like a lager but is made black by malting the barley for longer.
The new product, which is served in 330ml bottles, is being trialled in Northern Ireland, supported by a new advertising and marketing campaign plus in-bar promotions.
“Guinness Black Lager, like all lagers, is characterised by its refreshing taste,” said head of Diageo Northern Ireland, Michael McCann.
“The addition of Guinness expertise, roasted barley and a late hopping imparts a taste that is unique among lagers.”
Sales of black lager are reported to be soaring in the UK, with offerings such as Budvar Dark and Brewdog's Zeitgeist both recording an increase in demand in the past year.
Sir Dayvd ( who as a dark beer drinker, can feel himself being targetted ) of O
Posted by dkWells