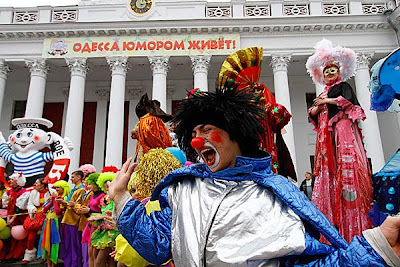 Clowns all over the world went to the streets in protest yesterday after they discovered that April Fool's Day had officially been canceled (there one U.S. spelling and one U.K spelling)!

Thankfully, April Fool's is not really celebrated too much in my world; I'm not much of a "play jokes and pranks on people type of guy."

Having said that, I do enjoy a good prank pulled on the public. I mentioned this to Sir D yesterday and he shared this:

"Today's April 1st TV (BBC) efforts were that a) major soap stars were going to be put on a limited number of bank notes....b) that zoo was in trouble for interviewing only people over 6ft 2" to be keepers for their Giraffe enclosure..... and c) that old chestnut...of the AA motor repair guys who come out and fix your cars (AAA in USA ) were being equipped with James Bond like jet packs.

TV News pranks are nothing new. Here are a few from the Top 10 List:

Here’s our list of Top 10 April Fools’ pranks from around the world, much of it inspired by the Museum of Hoaxes website.

ENGLAND: 1957: A BBC news show announced Swiss farmers had grown spaghetti, showing footage of peasants pulling spaghetti down from the trees. Viewers believed it, calling into the BBC to ask how they could enjoy their own spaghetti crop. The BBC replied, “place a sprig of spaghetti in a tin of tomato sauce and hope for the best.”

SWEDEN: 1962: The sole television channel in Sweden was still black-and-white, but on April 1 it announced that viewers could easily convert to color. The station's technical expert, Kjell Stensson, said to pull a nylon stocking over the box. Supposedly, thousands of people actually tried.

UNITED STATES: 1992: National Public Radio announced that Richard Nixon, after living nearly two decades in disgraced retirement, was running again for president. His new campaign slogan was, according to NPR, "I didn't do anything wrong, and I won't do it again."

FRANCE: 1986: A newspaper, the Parisien, reports the Eiffel Tower will be deconstructed and rebuilt in the new Disney World opening in Paris.

ITALY: 1919: Venice woke one April 1 to find horse manure littering the streets, odd since the city of canals had few horses. The British prankster Horace de Vere Cole, who was honeymooning in Venice, had transported a load of manure from the mainland the night before with the help of a gondolier and had then deposited small piles of it throughout the Piazza.

GERMANY: 1915: In the midst of World War I, a French plane flew over the Germans and dropped what appeared to be a huge bomb. Rightfully alarmed, the German soldiers fled. But instead of an explosion, there was a bounce. The Germans crept back to the load and discovered it was a football with a note that read, "April Fool!"

(We can't find any source aside from the Museum of Hoaxes for that last one – if you can shed any light on it, please send us a comment.)

1. IRAQ: 1998: Even in Iraq they celebrate April Fools' Day, calling it Kithbet Neesan, or April Lie. When Saddam Hussein was still in power, an Iraqi newspaper owned by his son, Uday, declared on its front page that President Clinton said ''it was time for lifting the sanctions.'' (The UN had imposed sanctions after Iraq invaded Kuwait in 1990.) Saddam was probably not amused.

And finally, my favorite from this year: 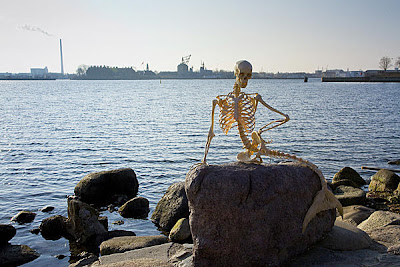 Handout photo obtained on April 1 from the Statens Naturhistoriske Museum shows a mermaid skeleton placed on the rock where Copenhagen's famous 'Little Mermaid' statue habitually sits, as an April Fool joke. The statue is on its way to Shanghai for the World Expo. 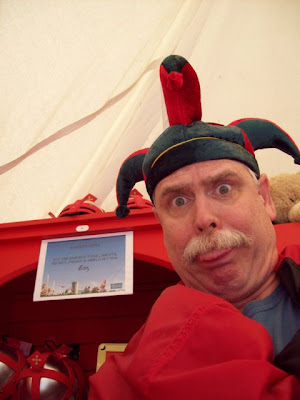