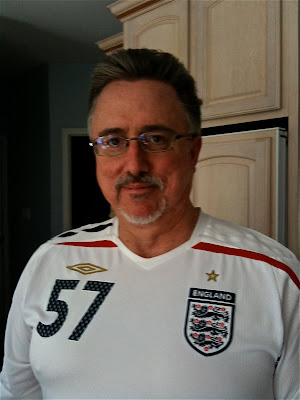 Today is a proud day for this Founding Father...for today is the third Anniversary of our Merry Band of Ladies and Knights...and "Founders Day" on the official Feast Calendar of the Knights of Moleskine, Spirit and Ale!
Little did Sir Bowie and I realize how the seeds sown on this day in the bar at Old Chicago in Evansville would have grown into the international phenom we have today.
And, just a few months later, I would meet Sir Dayvd of Oxfordshire at McGrath's in Harrisburg, PA...who would later earn the title of Honorary Founding Father, and design our Coat of Arms and add so much to what we had hoped to accomplish on this day three years ago!
By the end of this year we will have published our 1,000th Post! 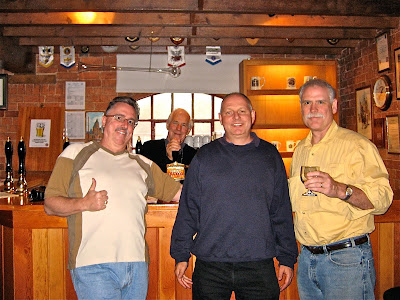 Sir Hook, Sir Dayvd & Sir Bowie at Hook Norton Brewery in Oxfordshire
Last July, we traveled across the pond for our first International Council. Today, we are on the cusp of adding a Spanish Chapter, when Sir Richard the Lionheart of Beaver Creek crossed the pond just few months ago and got the locals in Madrid and the surrounding countryside enthused about our Merry Band! Sir Richard will be uploading posts on that incredible adventure, which we can't wait to read and to welcome our Spanish brother in arms!
So, today on our third anniversary...the three Founding Fathers...wish you well as you explore our three tenants of the KMSA....THINK...DRINK...BE MERRY!
Cheers!
Sir Hook of Warrick
Posted by dkWells