"If I was a guitar i'd be well and truly plucked" sang the hearty Folk singer.. at 2am in the morning, in an over- full Irish pub on Magdalen Bridge in Oxford. He was surrounded, nay, crushed in the noisy bar by drinkers and fiddlers and accordian players, flute players and a girl even pushed into the throng with a full stand up double bass, joining in with everyone else with the raucous jam, her notes putting ripples on our dark beers.
It was Saturday and still another day to go with the annual Oxford Folk Festival. The poster above says all i managed to survive, but the reason i thought i'd bring this to the KMSA is because the sunny day in the city had born witness to an influx of Morris dancers from all over the country, to a place which is actually the Mecca of Morris dancing.
I've written blogs about Morris Dancing before on this site... But this update comes a few months after the Founding Fathers and their Femmes, visited in July and they too got the chance to actually see and join in with a troupe of the Oxford City Morris dancers.
Indeed, my memory seems to tell me that Lady Aileen took some Video Footage of Hooky strutting his stuff and waving his hanky with them..and I've been waitng , hoping that it might actually show up on the blog. (?)
For those new to us, here is a resume of what Morris dancing is about from the City Dancers website. 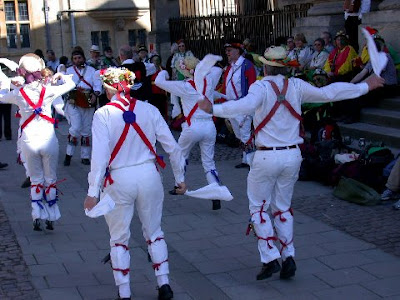 The Morris - An Explanation

Morris dancing is a custom with ancient origins. Many people believing that it is descended from pagan spring and summer fertility rituals or “good luck” ceremonies. Some of the dances we do today still reflect the origins of these ancient ceremonies, with their apparent emphasis on rebirth at May time, the seeking of good health for the crops and animals, and the hoped for guarantee of continuing fertility for all. What is certain is that morris dancers have been performing in the City of Oxford since the 15th century.

The dances survived in the Cotswold region long after they had ceased to be popular elsewhere. Even here the custom almost died out at the end of the 19th century, but for the efforts of folk dance enthusiasts who began to collect the dances. Oxford played an important part in this revival, as the first serious collecting of these dances was carried out by Cecil Sharp in Headington Quarry, in Oxford ) after he had seen morris men perform on Boxing Day 1899.

Oxford Morris Men were founded in 1938 and were formed to compensate for the temporary demise of other Oxford sides at that time. The Oxford costume - red and blue ribbons, white clothing and traditional bell pads is based on that worn by the Headington Quarry Morris dancers at the time. Since 1959 we have had the privilege of wearing the City of Oxford crest on our baldrics - thus becoming. 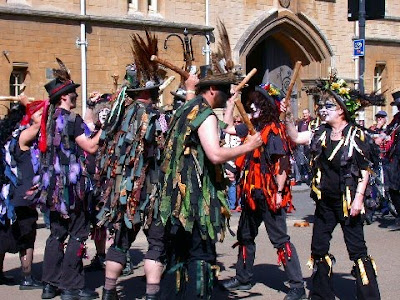 Each team has its history and they stick rigidly to the clothing they choose for themselves. the tradition clothing is the white romper suit style with bells on red leather strapping is the common style but many teams from in the north dress in black and black up their faces in what was the original Moorish ( hence Morris ) theme.

So there you have it. The pictures I have shown you here, I took in the town during the day, when i counted upwards of twenty different bands of dancers all performing to big crowds on plazas and squares under the shadows of the ancient buildings they were first performed under...and long may they continue through the years. 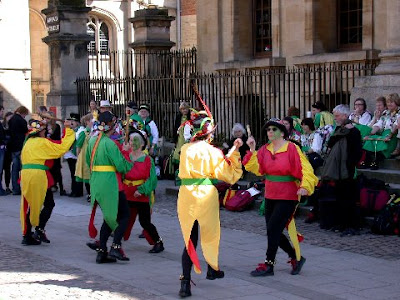