Sir Hook Does the Hanky Panky!

As a follow up to Sir D's excellent post on the Oxford Folk Fest and Morris Dancing...and in celebration of St. George's Day...I give you...
KMSA Date: July 10, 2009...Sir Hook does the Hanky Panky with the Scholars & Gentlemen Morris Dancers outside the Bear Pub in Oxford! 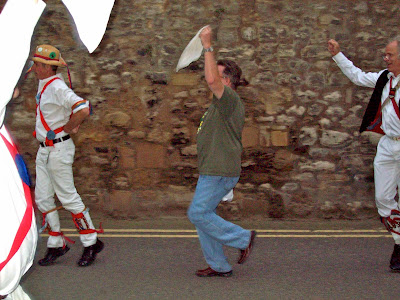 Earlier in the day we ran across a few of these Merry Morris Men who mentioned that they would be dancing later that evening. They are called Scholars & Gentlemen because half of them are professors at Oxford Universities and the other half are...well..gentlemen, for a lack of a better word! lol
After being introduced to Morris Dancing a year early in one of Sir D's excellent and informative blogs...we had to check it out. 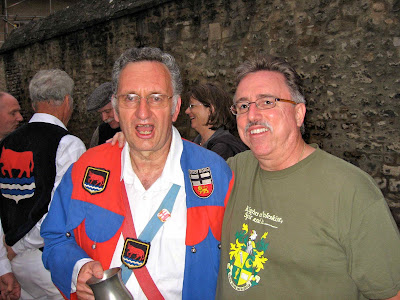 While on our way to Magdelen Arms to catch the rock band, Red Ox, we came across the Morris Men outside the Bear Pub. First, we Endeavored to Engage with beers and conversation...which led to filming them...which led to Sir Hook waving his Hanky with great enthusiasm as part of the Morris Men through the streets of Oxford. Sadly, there is no footage of the Hooky Hanky Panky, but this little shuffle with a rather handsome female still tells the tale!
As we bid our farewells, the Scholars & Gentlemen told me that I was a "natural" Morris Man and should explore joining a group in the States. I prefer to save the experience for a return trip to Oxford some day. 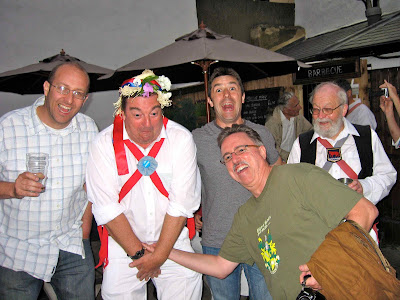 Remember, you can Dance if you want too! It's all part of Thinking...Drinking...and Being Merry!
Sir Hook the Scholar & Gentleman Hanky Panky Morris Man of Warrick
Posted by dkWells