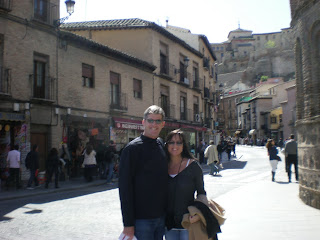 Lady Traci of Pong and I had discussed for sometime the notion to make a journey across the Great Pond to visit the Ancient Land of Andalusia and the southern coast of Spain. Lady Traci's eldest daughter....Lady Brittany of New Harmony currently teaches English to young Spanish elementary school children in the city of Murcia. Murcia is about 3 hours+ southeast of Madrid.

Last week....we returned from Spain with some awesome memories of some great people and great surroundings. We definitely hope to return..... 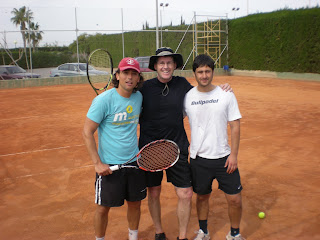 This first account is literally an international tennis exchange....between this worthy and older Knight....Sir Richard....and some strapping young studly Spaniards named Pedro Luis Sandoval and Paco Francisco. Lady Brittany's wonderful boyfriend Roberto had made arrangements for this Knight to have a tennis exchange on the slow, legendary red clay of Europe at a nice tennis club in Molina, ESP outside of Murcia. Sir Richard is a fairly decent player in his own right...and the sometimes scourge of Wesselman Park known for frustrating younger and stronger players with his crafty game...and wingspan! He wears his Columbia fishing hat to keep his dermotologist happy....and to also make his competition NOT take him seriously.
Watching Pedro and Paco warm-up before Sir Richard joined them on the red caly court....he got a lump in his throat watching these two strapping pros pound their beautifully trained ground strokes back and forth across the dusty clay court. Now we know why Spain wins the Davis Cup world team competition every year these days!......

Both Pedro (in the red hat) and Paco are tennis pros who were products of the Spanish National Junior Tennis program and played satellite tournaments all over Europe....Paco in particular was a VERY strong player and teaching pro that Sir Richard was only able to muster a few points from in a few tiebreakers. I was then informed Paco had trained with years prior and played fairly even with David Ferrer - current top 30 in world Spanish player on ATP tour...so Sir Richard did not feel so unworthy as when he lost that last tiebreak 7-0. I was able to save some face and surprise the very strong Pedro in a thrilling 10 point supertiebreaker 10-6. Pedro had overpowering topspin ground strokes....but Sir Richard's Vegamatic-like slice backhand was able to frustrate the younger and stronger Pedro. Sir Richard does NOT want a re-match as he believes payback would be.....hell! 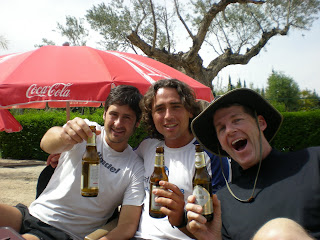 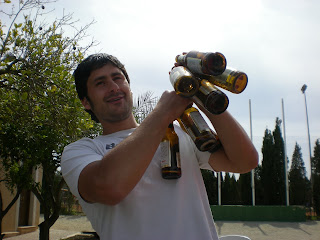 Afterwards....Pedro immediately insisted we partake on the club grounds...the art of tapas and drinking local favorite beer Alhambra. This Knight was overwhelmed with the hospitality...and in fact....we were all communicating incredibly well after that 5th round of Alhambra ales and 6th plate of tapas....beer IS the international language understood by all Knights. This Knight was also introduced to a favorite local delicacy of the Murcia region....Pu Puo....otherwise known as "grilled octopus". Lady Traci of Pong did all she could not to hurl....but Sir Richard made the proclamation : "Tastes like swordfish!". Pu Puo went on to become a favorite tapas of Sir Richard the rest of our 10 days in Spain....much to the chagrin of Lady Traci!

Pedro and Paco would like to become Spanish Knights of the Moleskine...in fact.....this Knight was informed that the famous movie from the 1960s El Cid was filmed in southern Spain....and the Knights of the Templar were residents of the historic city of Granada. This Knight will also give an account of our visit to this beautiful city and the world famous Alhambra (Moorish castle on mountain top overlooking Granada).

Sir Richard remembered the far-fetched accounts of his late father Sir Richard Sr....that we were in fact descendants of King Richard the Lion-Hearted of England who fought in the Holy Wars against the Moors in this region....but this Knight also remembered that the Courtney family actually came from County Cork in the southern-most point of Ireland. He smiled and appreciated his late father's gift for embellishment.

You must get to Spain someday.....its a beautiful mix of the modern....with well preserved ancient cities and architecture. Sir Richard also proclaimed that "the Spanish have the best toilets in the world!!" There is also a bakery on every corner of Spain....wow do they love their sweets and fresh baked breads!
I also want you to see how a traditional Spanish family....the Sandovals.....celebrate a normal Sunday lunch.....wow. Lady Traci and I were overwhelmed with their hospitality. 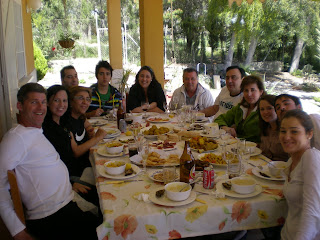