Burger and a Beer

One of my favorite meals of all time is a pepper-cheese burger and cold beer at the Darmsdadt Inn (Darmsdadt, Indiana). Sometimes, when I'm REALLY hungry, I'll order a double. That's a half pound of meat.

That's a lot of meat and cheese, but it's NO MATCH for Brad Sciullo. 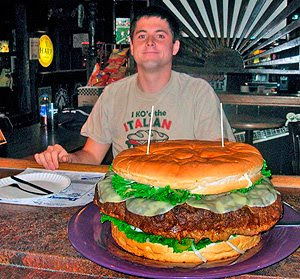 Uniontown resident Brad Sciullo said he actually "trained" in order to consume the $50 Beer Barrel Belly Buster in record time at Denny's Beer Barrel Pub in Clearfield, Pa., the Pittsburgh Tribune-Review said Friday. When asked what possessed him to eat a burger that big, Sciullo said: 'I wanted to see if I could. (PHOTO: ASSOCIATED PRESS)

"I'm all trained up, I'm real hungry and I got to do something," the competitive eater said before Monday's over-sized meal.

Sciullo said in order to set a record time for eating the mammoth meal, he had to not only down the base burger but also consume a cup each of ketchup, mayonnaise, mustard and relish.

When the smoke cleared and the crumbs were wiped away, Sciullo beat the eatery's previous record time by 21 minutes with a final time of four hours and 39 minutes.

The Tribune-Review said Sciullo won $400, three T-shirts and a certificate.