Pub Crawl and More...the Drinking Chronicles of an Errant Knight

Always being one to mix business with pleasure, I decided to venture out beyond the hallowed halls of Dublin Village Tavern on my recent 4 night tour of Ohio. After a 6 hour car ride to Marysville for my first meeting, I ventured the relative short drive from there to Dublin and made my first stop at the Rusty Bucket Corner Tavern on Perimeter Loop Drive. 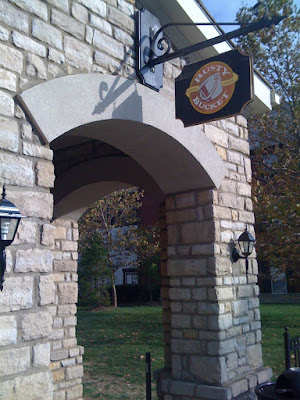 The Rusty Bucket is housed in a Stone and Wood structure that gives one a feeling of a tavern that has seen its share of troubadours, adventurers and Knights. It's a comfortable fit after a hard day at work, or on the Jack Nicholas designed Murifield Golf Club just a good 3 wood away. I being one of 4 in business attire, with 7 in golfing attire, made up the beginnings of a good evening sitting around a rectangular bar that is positioned in the middle of the establishment surrounded by booths and tables. Lady Hillary of Bradenton was my recent convert and tender of the bar. 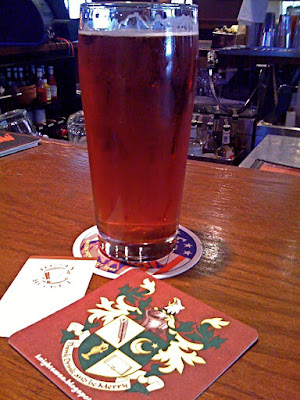 She poured me a fine draft of the Beck's Oktoberfest Beer in a handsome, slightly fluted glass. I entertained myself with conversations with Lady Hillary, a salesman from Huntsville, Alabama who has a 13 year old son who can throw an 85 mph fastball, and a marketing guy from Cardinal Health who recently moved to Dublin from Edmington, Canada...hey. I also enjoyed the music being played, so I pulled out my "Small Big Idea Book" and decided to make a Pub Crawl play list from all my visits to the various establishments encountered. 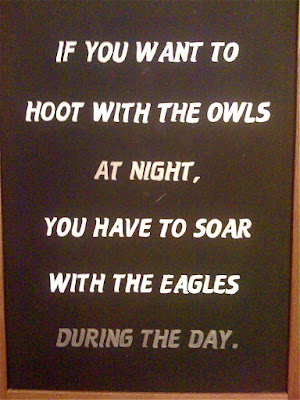 In keeping with my love of bathroom art, I took this picture hanging prominently in the "Male Stall" of the Rusty Bucket. I found it rather appropriate for the occasion! 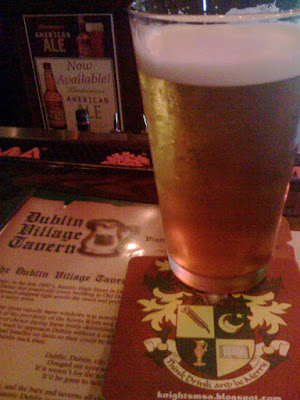 Night 2 saw this Errant Knight, being the creature of habit that I am, settling into the comforts of the Dublin Village Tavern, like a pair of comfortable slippers by the fire. It was a crisp fall night and the pints of Boddington's where flowing freely along with a plate of DVT Meatloaf comfort food. Life doesn't get much better than this, if you're going to be alone at a bar. Of course, I'm now known as the "Indiana Norm" by the patrons and bar keeps. We all voted to watch the Red Sox come from behind victory over another so, so debate between Big O and Little John. 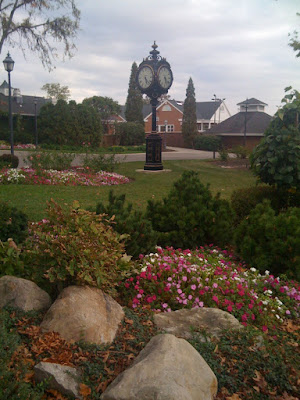 Night 3 brought an evening of interesting contrasts. After a full day at work, I was invited to attend a fundraiser for a Republican candidate for County Commissioner in Columbus at the Scioto Country Club. Located next to Dublin on the North Shore, the Scioto Country Club was founded in 1916 and among its notable accomplishments are being the Country Club where Jack Nicholas got his start, hosting the US Open in 1926, the Ryder Cup in 1931 and the PGA Championship in 1950. Beautiful grounds surround the crusty upper crust inside. After suffering through the standard boring board room discussions over a generous gin and tonic, I made my escape to downtown Columbus to Byrne's Pub. 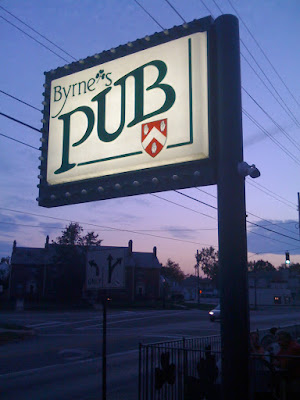 Byrne's Pub is a classic neighborhood pub, voted best in Columbus several years in a row by Alive Magazine. They have a whole room dedicated to Dart League, where they don't honor the winners, but the last place team. The prominent sign in this room is a big banner that reads, "Drink Like a Champion!" Behind the bar are various nick knack's like Irish Road Signs, and pictures of John F Kennedy and Willie Nelson. Now, there's a pair! 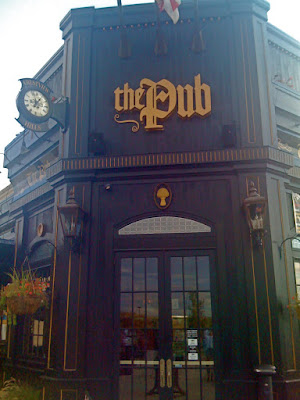 Fancy another pint love? That's the question at the bar of America's best try at an authentic British Pub experience. The Pub is one of 12 that are branching out of the Cincinnati, Ohio area, where this Errant Knight spent night number 4. 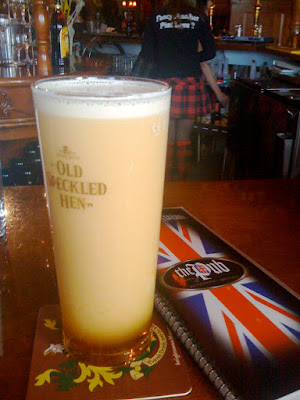 They have over 20 English beers on tap, as evidenced by my pint of Old Speckled Hen beginning to settle. Next to my pint is their "Beverage Bible", which lists all the beers, history and brewing techniques, a two page section on English versus American version of words and their meaning and even a copy of "The Philosopher's Song" by Monty Python:
Immanuel Kant was a real pissant
Who was very rarely stable.
Heidegger, Heidegger was a boozy beggar
Who could think you under the table.
David Hume could out consume
William Friedrich Hegal,
And Wittgenstein was a beery swine
Who was just a sloshed as Schlegel.
There's nothing Nietzsche couldn't teach ya
'Bout the raising of the wrist.
Socrates himself was permanently pissed.
John Stewart Mill of his own free will,
After half a pint of Shandy, was particularly ill.
Plato, they say, could stick it away,
Half a crate of whiskey every day.
Aristotle, Aristotle was a
bugger for the bottle,
And Hobbes was found of his dram.
And Rene Descartes was a drunken fart,
"I think therefore I am!"
Yes, Socrates himself is particularly missed;
A lovely little thinker,
But a bugger when he pissed. 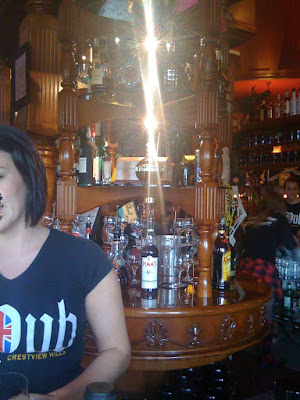 On prominent display on the hand carved oak bar was a bottle of Sir Dayvd's favorite summer drink, Pimm's #4. I wanted to try it, but I was too thrilled to actually get real English beer on tap! The Old Speckled Hen went down as smooth as mother's milk as I swot up like a jammy beggar whilst in a queue to spend a penny at the loo. 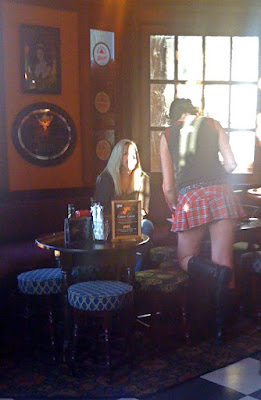 And did I mention the slapper's in kilts that keep you drinking, laughing and wankered! 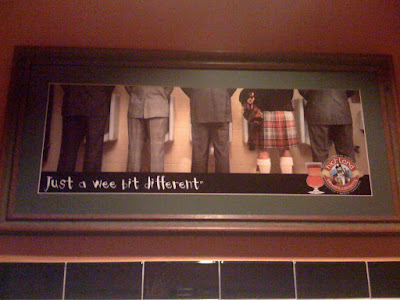 In the loo above urinal number two is this picture about being a wee bit different. Little did I know how true it would be. As I'm enjoying my piss I hear the sound of high heels coming around the corner. My first impression was that one of the kilted slapper's was on her way to greet me, instead I'm greeted by a daft bugger wearing a black kilt, high heel pumps, thigh high black stockings, silver hoop earrings and lipstick. He proceeds to smile at me as he lifts his kilt to expose a pant less way to piss. Now as the English say, "Horses for Courses", meaning to each his own, I was trying very hard to practice my belief in Unity through Diversity while not wanting to laugh, cry or just beat the living hell out of this "Off Your Trolley Dick Smoker"! 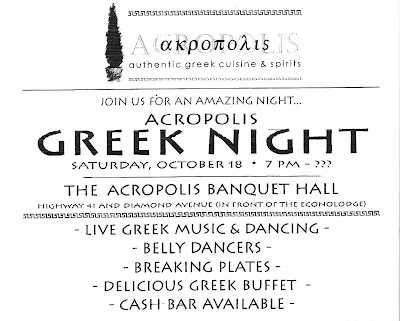 Now, for the "and More"! After my return home, Lady Allwinky and myself were invited to attend an annual event known as "Greek Night". I crawled into another culture after my pub crawl with "con mucho gusto", or "opa" as they say in Greece! The above advertisement says it all. We ended up befriending a table of hard charging Greeks from Cypress doing shots of Ouzo, breaking plates and throwing napkins, yelling and engaging in some belly dancing! 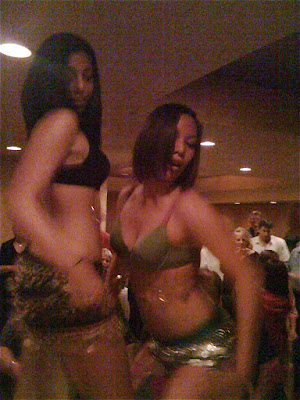 A picture is worth a thousand words! OPA!!!!