Futher to Sir Bowie's splendid blog about the Clydesdales of Pasadena, I thought it would be nice to show the knight and lady hood...the still working Beer Dray that still operates out of the Hook Norton Brewery in Oxfordshire. 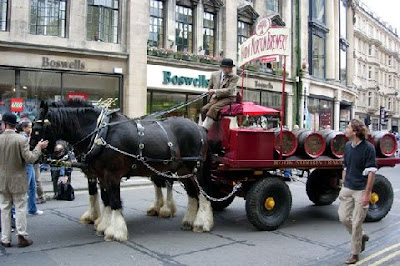 The shire horse drawn dray at Hook Norton Brewery ceased deliveries in 1950, but was revitalised in 1985, mainly for public relation purposes. The shire horses now only deliver beer to Brewery Pubs locally within 5 miles of the brewery, but attend many public functions such as fetes, pub openings and on the odd occasion, weddings and the Royal Windsor Horse Show. It should be noted that out of all of the breweries that own horse drawn drays, only two still actually deliver their products by dray and shire horse. At present the Brewery has three shire horses (Consul, Major and Nelson), who are looked after by their two draymen Roger Hughes and Philip White.

History of the Brewery Shire Horse

Some measure of how businesses like the brewery once relied on these wonderful horses can be illustrated by the difference in the number of shire horses on the brewery's books at the turn of the century.

As mentioned above, the Brewery accommodates three shire horses today, but in the in the late 1800's when horsepower was the only available form of transportation for the beers, within a limited radius of the brewery, you could have seen up to 8 shire horses stabled on the brewery site.

There would have also been additional horses stabled elsewhere. In Banbury, Shipston, Stratford, Witney and Stow, these would be used by outriders when making their rounds. Each outrider would be supplied with a horse and trap, supplied and paid for by the brewery. Equipping each shire horse was a costly business, and from various records we can see that in 1910 the total for this would have been £1,330 per dray. Not an inconsiderable sum at the time.

Due to the nature of the work from time to time, horses would be sold by the brewery. They were taken to the well-known Stow Fair, and would sell for prices between £15 and £20. Any replacements horses would be bought from local farmers. It was extremely rare for a shire horse to die in the brewery’s possession, but long serving faithful horses would be put out to grass to see out their days.

The shire horse is a powerful yet majestic creature and the names within the records seem to reflect this. Prince, Captain and Lion are to name but just a few. It should be said though they have had a Dumpling, Jumbo and Spot, which do not have the same air of grandeur about them!

A days work for a dray horse

The sight of the two shire horses leaving the brewery is extremely impressive, and one that forms the perfect picture of a rural idyll. Many tourists are in awe of this sight, and will spend a considerable amount of time admiring these handsome creatures.

Further Great photos of the Horses, ( and of the whole of Oxford and Oxfordshire where i live) can be found on this photosite: