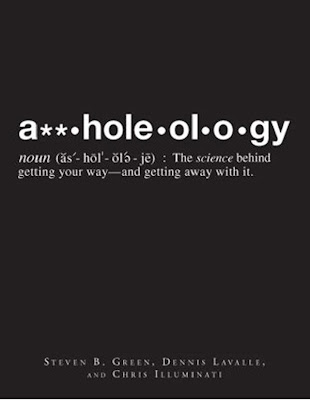 In the category of, "It takes one to know one!"...this book, placed in the Humor section, caught my eye yesterday during a break in the day at Barnes and Noble.
First, I found it clever in creating a theology out of being an asshole...being fond of creating theologies myself. (See Enthology in my KMSA blog...Stardate-February 8, 2009) But even more interesting is the subtitle of the book, "The science behind getting your way - and getting away with it."
It's a quick read and formatted brilliantly...with side bars throughout the book like, "The Quotable Asshole"..."The Ten Demandments"...and "The Hole Truth". Example: In showing how it takes time to develop into a true asshole, the book states the fact that "Rome wasn't built in a day." The Hole Truth: Probably because it was impossible to get work done in togas. Hell, it's hard enough just trying to party in them!
Basically, assholeology states that there is a difference between being an asshole (someone who gets what they want without being a douche bag) and a douche bag (someone who even their mother hates). The key ingredient is "LIKABILITY". A quality a person has that allows his actions to be excused because people enjoy being around him.
I'm actually surprised that the authors didn't think about the L as the gene that makes the difference...because without the L you have "IKABILITY"...the byproduct of a true "Douche Bag"!
Finally, in grand KMSA tradition, the book ends in drink recipes because, "An asshole knows his way around the bar."
In this section you'll find two gems in the form of Quotable Assholes:
"I never drink anything stronger than gin before breakfast."
-W.C. Fields
"I like my whiskey old and my women young."
-Errol Flynn
So, if you're gunning for that promotion, promoting your next great idea, looking to get laid, or want everyone's attention...get the HOLE Truth! And remember, the next time someone calls you an asshole...it's a complement!
Sir Hook Who puts a Capital "A" in Asshole and "L" in Likability of Warrick
Posted by dkWells

Email ThisBlogThis!Share to TwitterShare to FacebookShare to Pinterest
Labels: Assholeology, Getting what you want, Humor