(Note: I didn't want Sir Dayvd's comments yesterday to get buried, well, in the the comments. So I'm posting it here so no one misses it).

Well if your heart is singing (to Christmas songs)...then sing along to this...

Back in 1998...before Viral communications were truly invented...
me and the members of the Holy Roman Empire ( art disco band ) got round a drum-machine and a rudimentary Q-base..and recorded a novelty single that was put out on Tim Healy's Luscious peach label...

it was in response to the fact there were no decent catchy Christmas songs being released any more. Its sold a few copies locally....but of course there was no myspace and Youtube and I-phones back then and it all got forgotten.. this this morning I phoned Ste up in Liverpool and said hey why don't we just get the track and stick it on Youtube and send it to everyone LOL...

and so we have and here it is in all its silly christmassness...LOL 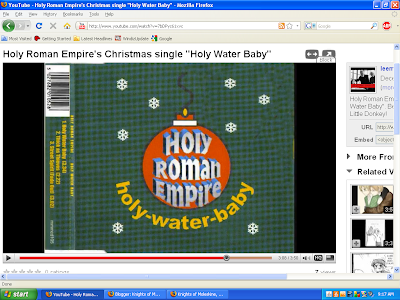