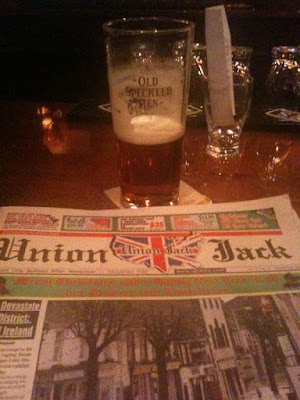 Sir Hook's Traveling Medicine Show is back in Columbus, Ohio. I dropped into one of my favorite watering holes...The Pub in Polaris this evening and came across a recent edition of the "Union Jack", America's only national British newspaper.
My fellow patrons wondered if I had just escaped from a mental institution as I laughed my "arse" off while reading the news from the Merry Isles! Here's just a few "Quintessential English" headlines:
Royal Navy Ship Watched As Pirates Took Two Britons
Jenny Earns Titled As 'Loudest Snorer' in Britain
Rare Charles Darwin Book Found on Toilet Bookshelf in Oxford Home
Movie Actors Thought to be Real Football Thugs
Allergy Turns Out to be Man's Own Wife
Baby Back Home with 'Fat Family'
Brits Said to be Ugliest in the World
Margaret's Vacuum Given a Spot in Hall of Hoover History
Britain Has World's Oldest Divorcees , 98
Some Kids Really Think Hitler Was a Football Manager 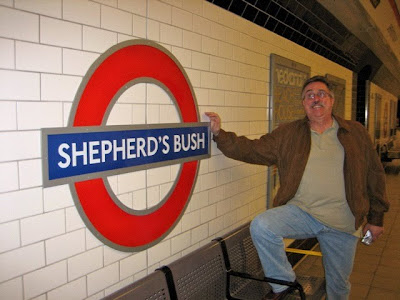 And my favorite of the bunch reminded me of our fun this past July in London while "Getting Off at Shepherd's Bush"!
TUBE RIDERS SHOCKED BY 'PASSIONATE TANNOY MESSAGE'
LONDON: Underground commuters got a shock last month when instead of train information being broadcast on the tannoy system, they got an earful of a couple apparently making love.
Passengers at West Ham station in east London heard sounds of passion instead of the usual announcements about delays being relayed over platform loudspeakers during the rush hour.
A Transport for London spoksman blamed radio interference-but passengers were not convinced. "It was definitely a couple doing it there and then.", Laura O'Conner told the London Evening Standard newspaper.
"He was grunting loudly and she sounded like she was having a great time. The driver must have heard it, too, as the doors stayed open longer than usual."
However, the Transport for London spoksman insisted: "The noises heard by passengers were not from within our station. We believe they were a result of some sort of interference with our public address system. It certainly wasn't coming from our staff."
He said the station's public address system worked on radio waves and somebody must have been broadcasting on the same wavelength. He said staff turned off the loudspeakers as soon as they realized what was going on.
My only question is....was Sir Dayvd of Oxfordshire around West Ham station last month? Sir Bowie and I remember all too well how he left us at the platform with our ladies in tow on the Central Line!
Sir Hook Who Loves a good English Story of Warrick
Posted by dkWells