It was on this day (December 5th) that we would decorate plates or bowls (and maybe even our empty, stinky shoes) in anticipation of St. Nicholas coming. 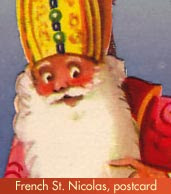 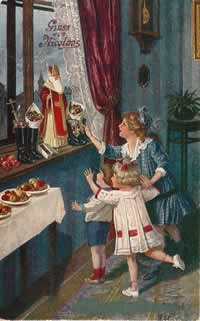 The next morning the empty vessels would be magically full of hard candy. St. Nicolas Day is how I remember the Christmas Season really starting (That, and the day the GIANT Sears Toy Catalog arrived).

According to a very interesting web site, StNicholasCenter.org

St. Nicholas day is celebrated all over the world in a lot of unique ways. Here in the States, Bishop St. Nicholas is celebrated by many churches and by communities which have a Dutch heritage. On the Advent Sunday closest to St. Nicholas Day, December 6, some churches have St. Nicholas festivals, large or small, with the good saint himself appearing to greet children, give instruction and encouragement, and hand out treats for children of all ages. 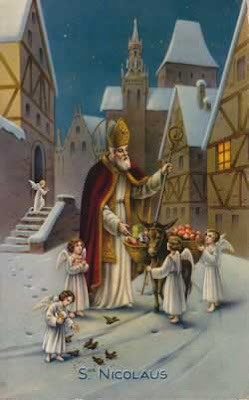 In some places he is a focus in worship and in others he is part of a special fellowship event.

England has nearly 500 Anglican churches named for St. Nicholas. These parishes and cathedrals mark their patron saint's feast day with a special Patronal Feast. As St. Nicholas Day is in early Advent and he is associated with children and gifts, many churches invite the saint to visit during, or after, the Sunday service, to explain who he is and what it means to celebrate his memory today. (Some churches do observe the day properly on the 6th rather than on the closest Sunday because each Advent Sunday has its own important theme.) On this day the homily reflects St Nicholas' true identity, as opposed to the more commercial Father Christmas or Santa. There is also a time for collecting food, gifts, and money for the less financially privileged. 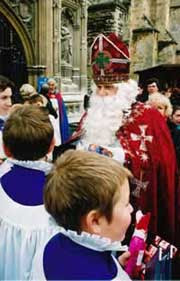 In a Caribbean celebration with origins in the Netherlands, the Dutch Sinterklaas sails into harbor from Spain in mid-November, with his white horse and an entourage of Zwarte Piet helpers. (Though in Curaçao, the "horse" is a white Ford Mustang!) Families gather in a festive spirit to greet their arrival. A parade follows with the good saint and his helpers throwing pepernoten to the children.

On St. Nicholas Eve, 5 December, children put a bucket of water and a shoe filled with hay or a carrot outside for the saint's big white horse. If they have been good, the shoes will be filled with gifts by morning. If they haven't been good, Zwarte Piet just might pop them into a large sack and carry them back to Spain. During the evening gifts are exchanged in the Dutch way by wrapping them in elaborate disguises and presented with a humerous poem about the recipient.

So, what's the difference between St. Nicholas and Santa Claus?

From the web site -- written by J. Rosenthal & C. Myers

Everybody loves Santa Claus. He embodies holiday cheer, happiness, fun, and gifts—warm happy aspects of the Christmas season. How do Santa Claus and St. Nicholas differ?

Santa Claus belongs to childhood;
St. Nicholas models for all of life.

Santa Claus appears each year to be seen and heard for a short time;
St. Nicholas is part of the communion of saints, surrounding us always with prayer and example.

Santa Claus flies through the air—from the North Pole;
St. Nicholas walked the earth—caring for those in need.


Sir Bowie "who would like to nominate Saint Nicholas as a Knight and St. Nicholas Day as an official feast day" of Greenbriar

P.S. I wonder if we Knights put out empty beer bottles is St. Nicholas would magically fill them up for us?
Posted by dkWells