Countdown: The Spirit of Advent 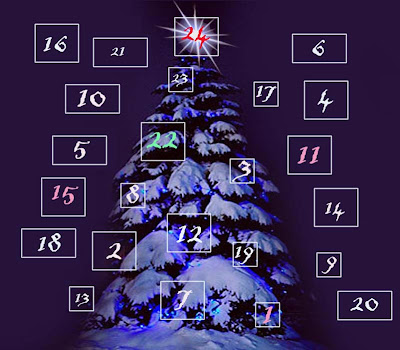 I love the Spirit of Advent! It's a special time when the year is winding down, giving me opportunity to reflect on what was, what is, and what will be. The anticipation of the coming! There's a great freedom in the Spirit of Advent.
This freedom has offered me the opportunity to move easily and gracefully between the polar opposites of mankind, which has truly enriched my life beyond measure.
I've always been a "free spirit", which can be translated into many meanings, depending upon the oracle of the moment.
"Free Spirit" to my father meant..."You'll never amount to anything." Usually this phrase occurred when I chose to do something I wanted to do, instead of what he wanted me to do, like the time I gave up my position on the starting 5 of my high school basketball team to form a band to play at the games.
"Free Spirit" to me means that I can not be constrained by physical, spiritual or emotional limitations attempted to be placed on me by those who are threatened by my Cosmic Surfer Mentality.
On the other hand, being a "Free Spirit" has also given me the ability to connect with the physical, spiritual and emotional limitations in myself and others. So while I can disconnect from others expectations of me...I can not disconnect with them as a fellow traveler in time.
This is one of the reasons I embrace Christianity, specifically Catholicism at its true uncorrupted by man meaning. God and huMAN are one...Universal!
C.S. Lewis called the birth of Christ "The Grand Miracle". He wrote, "The Christian story is precisely the story of one grand miracle, the assertion being that what is beyond all space and time, what is uncreated, eternal, came into nature, into human nature, descended into His own universe, and rose again, bringing nature up with Him. It is precisely one great miracle. If you take that away there is nothing specifically Christian left."
Lewis also believed that the Incarnation was vastly more important than the death and resurrection of Christ, which so many "Religions" place emphasis on. I agree, which is why I can also embrace the teachings of other great spiritual and humanist masters. The Great Spirit lives in all of us...we all are living Incarnations...connected in this vast Universe of life, death, life, death and.......
So, this Advent let Inspiration take the place of Aspiration as you reflect on The Grand Miracle that is you!
Sir Hook the Advent huMAN of Warrick
Posted by dkWells