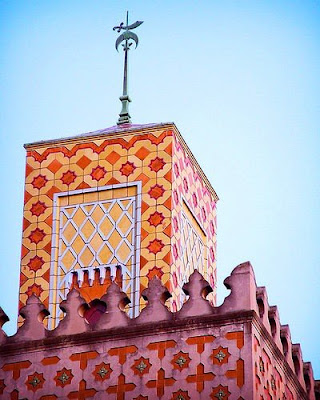 Sir Bowie's excellent history of the famous Shriner logo..immediately took me back to the time I first lived in Harrisburg PA, and like the curious Brit I am, I set out to explore my environs...and was straightaway taken by a marvelous building in the North of the City... that took my interest because it was so unlike all the other boxy US buildings in that it had castellations that reminded me of the UK..., and apart from Lancaster PA prison (which is modelled on Lancaster castle in the UK), I hadn't seen anything quite like it in my time there.
I soon found out it was the Zembo Temple and belonged to the Shriners and all the history that, that entailed :-
The growth in the activities and membership of the Harrisburg Masonic Shriners had by the end of the 1920's, resulted in the demand for a grand new facility. The emergence of Italian Lake Park, William Penn High School and the establishment of Polyclinic Hospital on N. Third Street had aesthetically transformed the northern end of Harrisburg into a place of prestige and beauty.
To punctuate this beauty would be the rise of the Zembo Shrine Temple, between 1928 and 1930, the design of which would represent the culmination of Harrisburg architect Charles Howard Lloyd's (1873-1937) career. Lloyd, perhaps the City's most prolific architect, was known for his schools and office buildings. He designed such Harrisburg notables as the Technical High School (now Old City Hall), and Simon Cameron School and William Penn High School.
Although the Harrisburg Masons were originally headquartered in the Grand Opera House at Third and Walnut Streets, which was destroyed by fire in 1907, and later at the Masonic Temple at Third and State Streets, now the Barto Building, the Masons' Zembo Temple chapter which was established in 1905, would ultimately seek its own building expressing its own identity.
The mid-eastern themes traditionally associated with the Shriners since their founding in New York City in 1872 were captured by Lloyd within the context of Art Deco styling in the new facility. Adorned by a minaret tower, elaborate tile work and dazzling interior spaces opening to a majestic auditorium, the Temple has long been the stage for famous personalities, events and performances of national and international acclaim.
http://zembo.org/index.php?option=com_frontpage&Itemid=1 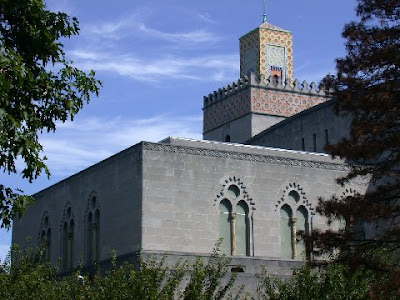 So Thank you Sir B for bringing that back to my mind, sending me to search out my CD of photographs from that period, and letting me reminisce, with a cup of tea, on this snowy evening.
Sir Dayvd ( the eskimo knight ) of Oxfordshire
Posted by dkWells