I received an email from Sir Davyd; seems he's having some computer problems.

While he waits for tech support to perform a cyber exorcism (or whatever it is they do), I thought I would pass along this bit of computer news: 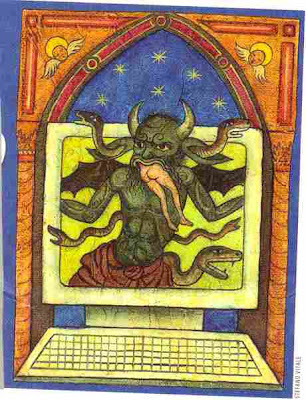 Your computer may be possessed by a demon, a leading minister warns.

“While the Computer Age has ushered in many advances, it has also opened yet another door through which Lucifer and his minions can enter and corrupt mens souls,” said the Reverend Jim Peasboro, author of The Devil in the Machine. Demons are able to possess anything with a brain, from a chicken to a human being. And today’s thinking machines have enough space on their hard drives to accommodate Satan or his pals. “Any PC built after 1985 has the storage capacity to house an evil spirit,” the minister confirmed.

The Savannah clergyman says he became aware of the problem from counseling churchgoers.

“One woman wept as she confessed to me, ‘I feel when I’m on the computer as if someone else or something else just takes over.’ ” The minister said he probed one such case, actually logging onto the parishioner’s computer himself. To his surprise, an artificial-intelligence program fired up — without him clicking it on. “The program began talking directly to me, openly mocked me,” he recalls. “It typed out, ‘Preacher, you are a weakling and your God is a damn liar.’ ” Then the device went haywire and started printing out what looked like gobbledygook.

“I later had an expert in dead languages examine the text,” the minister said. “It turned out to be a stream of obscenities written in a 2,800-year-old Mesopotamian dialect!”

The minister estimates that one in 10 computers in America now houses some type of evil spirit. Rev. Peasboro advises that if you suspect your computer is possessed, you consult a clergyman or, if the computer is still under warranty, take it in for servicing. He says, “Technicians can replace the hard drive and reinstall the software, getting rid of the wicked spirit permanently.”

You can read more at: http://liberator.net/articles/TremblayFrancois/digital.html 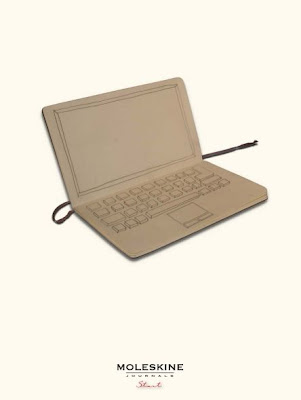 In the meantime, you can always go back to the holy Moleskine.