All the Young Dudes 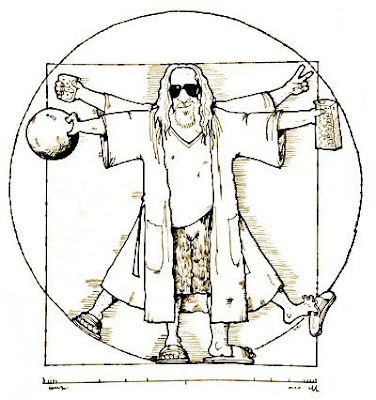 In a crowded and bustling auditorium in London the other night, i happily bumped into an old pal, who had disappeared for a few months off my radar.
Dominic, it had turned out, had been way out west in the USA...with a film production company doing a documentary, in the Southern States, on the rise and rise of that newest of American philosophies, Dudeism. In the US it is a growing *Business* and I put that in Stars, because *business* is the last thing a Dude would claim to be interested in.
In the light of Jeff Bridges (The Dude) finally becoming the first Jeff Bridges to win Best Actor Oscar for his 18th portrayal of a very slightly different version of himself, in "Crazy Heart", I decided, as the 70% fun loving Taoist I am, (the other 30% of me has a voracious untaoistic itch to create Art, that I have to scratch) to check out this slow moving Cult that seems almost the opposite of the normal G0-gettum and pound 'em, we're #1 American Dream.
Dudeism is a religion whose primary objective is to promote a philosophy and lifestyle represented by the character of "the Dude" in the Coen Brothers' 1998 film The Big Lebowski, played by the aforementioned Jeff Bridges.

Founded in 2005 by Oliver Benjamin, a journalist based in Los Angeles, California and Chiang Mai, Thailand, Dudeism's official organisational name is The Church of the Latter-Day Dude. As of March 2010 over 70,000 "Dudeist Priests" had been ordained via the church.

Although Dudeism primarily makes use of iconography and narrative from The Big Lebowski, adherents believe that the Dudeist worldview has existed since the beginnings of civilisation, primarily to correct societal tendencies towards aggression and excess.

They list individuals such as Lao Tzu, Epicurus, Heraclitus, The Buddha, and the pre-ecclesiastical Jesus Christ as examples of ancient Dudeist prophets. More recent antecedents include pillars of American Transcendentalism such as Ralph Waldo Emerson and Walt Whitman and humanists such as Kurt Vonnegut and Mark Twain.

The Dudeist belief system is essentially a modernised form of Taoism purged of all of its metaphysical and medical doctrines. Dudeism advocates and encourages the practice of "going with the flow" and "taking it easy" in the face of life's difficulties, believing that this is the only way to live in harmony with our inner nature and the challenges of interacting with other people. It also aims to assuage feelings of inadequacy that arise in societies which place a heavy emphasis on achievement and personal fortune.

Consequently, simple everyday pleasures like bathing, bowling, hanging out with friends are seen as far preferable to the accumulation of wealth and the liberal spending of money as a means to achieve happiness and spiritual fulfilment. 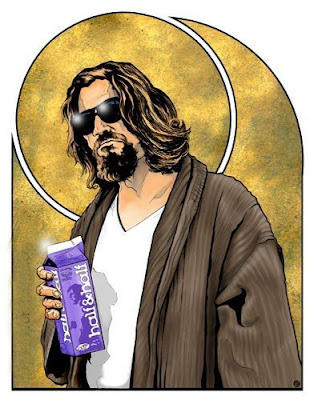 And I'm not going to argue with any of that...though the guys who demand a mortgage repayment off me each month...and the Government who are nailing me for ever larger slices of my income pie, would have a vastly different opinion and would no doubt prefer me to get my sorry ass out into the Marketplace a bit more gingerly of a morning.
Sir Dayvd (who by complete irony is just off downtown to buy a new wallet, as his old one has completely disintegrated and scattered its contents all over the newsagents floor.) of Oxfordshire.
Posted by dkWells