I was introduced to this site and book yesterday:
http://stuffwhitepeoplelike.com/
"Stuff White People Like: A Guide to the Unique Taste of Millions. They love nothing better than sipping free-trade gourmet coffee, leafing through the Sunday New York Times, and listening to David Sedaris on NPR (ideally all at the same time). " 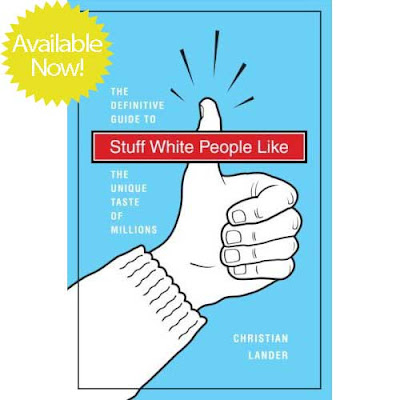 "They pretend to be unique, yet somehow they’re all exactly the same, talking abut how they “get” Sarah Silverman’s 'subversive' comedy (Personal note: Her show is on my DVR record list). They are also down with diversity and up on all the best microbrews, breakfast spots, foreign cinema, and authentic sushi."
"You know who they are: They’re white people. And they’re here, and you’re gonna have to deal. Fortunately, here’s a book that investigates, explains, and offers advice for finding social success with the Caucasian persuasion. So lose yourself in the ultimate guide (featuring brand-new entries and extras!) to the unbearable whiteness of being. "
Here is a partial list of Stuff White People Like. Sound like anyone you know?
#131 Conan O’Brien #130 Ray-Ban Wayfarers #128 Camping #127 Where the Wild Things Are #125 Bob Marley #124 Hating People Who Wear Ed Hardy #123 Mad Men #122 Moleskine Notebooks #114 America #113 Halloween #112 Hummus #111 Pea Coats #109 The Onion #106 Facebook #102 Children’s Games as Adults (do pub games count?)#101 Being Offended #99 Grammar #98 The Ivy League #93 Music Piracy #92 Book Deals #87 Outdoor Performance Clothes #86 Shorts #80 The Idea of Soccer (The IDEA of...)#76 Bottles of Water #72 Study Abroad #63 Expensive Sandwiches #62 Knowing What’s Best for Poor People #51 Living by the Water #40 Apple Products #39 Netflix #38 Arrested Development #35 The Daily Show/Colbert Report #23 Microbreweries #22 Having Two Last Names #2 Religions their parents don’t belong to #1 Coffee

Random Thought #2: I love St. Patrick's Day. Yes, my name is Kuhn, but my mother is a Riley. (So do White People, it's #89 on the list above)
"On March 17th,(white people celebrate) St. Patrick’s day. This very special white holiday recognizes Saint Patrick, the patron saint of Ireland who helped to bring Catholicism to the Emerald Isle. His ascetic life is celebrated every year by white people drinking large amounts of Irish-themed alcohol and listening to the Dropkick Murphys.
"Most of the time, white people consider celebrations of European heritage to be racist unless they omit large swathes of the 16th through 20th centuries. But since the Irish never engaged in colonialism and were actually oppressed it is considered acceptable and encouraged to celebrate their ancestry. For this reason, 100% of white people are proud to claim that they are somewhat Irish." 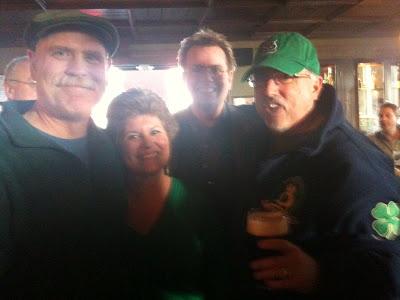 So, that's exactly what Lady Suzanne, Sir James of Taylor, Lady Gwendoline of Kensington, Sir Hook of Warrick, Sir Richard Lion Heart of Beaver, Lady Traci of Pong, just to name a few. In fact, at one point there were no fewer than a dozen Knights hanging around listening to one of our own, Sir Seamus of Marion: 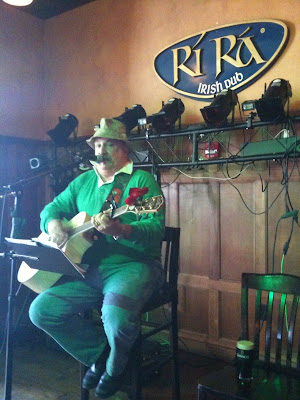 Random Thought #3: The day after St. Patrick's Day should be a holiday.

Random Thought #4: There should be a Patron Saint for people with hangovers.
Wait, there is! 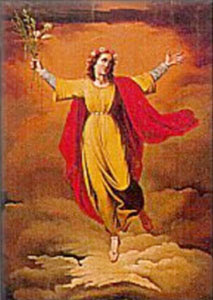 Did you have a bit much to drink last night during your St. Pat's celebration? You might be interested to know that the patron saint for people suffering from hangovers is Saint Bibiana (or Viviana). Bibiana was a virgin and martyr who died around 361.
And how did she come to be associated with relief from hangovers? Here is one possible explanation: Because the Spanish pronounce the letter "V" as the letter "B", Saint Viviana's name which means "full of life" (Latin vivo) was thought by them to mean "full of drink" (Latin bibo). Consequently, the Spanish invoked Saint Bibiana's name against hangovers.
Or, here's another possibility: A church was built over her grave, in the garden of which grew an herb that cured headache and epilepsy. This and her time spent with the mentally ill led to her areas of patronage.

Random Thought #5: Three sheets to the wind doesn't refer to the sails of a ship (not exactly, anyway -- something else I didn't know until yesterday).
Usage: He'd been at RiRa's for three hours, and was three sheets to the wind by now.
Explanation:Taken from sailing a square-rigged sailboat; square sails had four sheets (the ropes attached to the corners of the sail) to control them. If one or even two sheets went "to the wind" (meaning flapping in the breeze and hard to retrieve) the boat was still quasi-controllable. However, if a third sheet was lost to the wind, you had no way to fill your sail and were essentially out of control.
I bring that up because I also learned something else yesterday:
Random Thought #5a: "Three Sheets" is an international travelogue/pub-crawl television series. 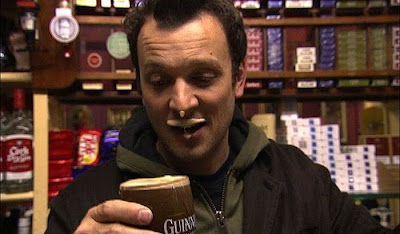 Comedian Zane Lamprey hosts a humorous trip around the world, sampling the local well-known (and little-known) food and drink, while also engaging in local alcohol-related customs. In each episode, Lamprey samples various drinks and food in addition to learning about the customs and libations of that area, and then experiences the local hangover cure. The series is produced by Screaming Flea
http://www.zanelamprey.com/projects/three_sheets/save_three_sheets.php
Random Thought #5b: We need to contact this guy and offer him a Knightship!
Random Thought #6: I should conclude this post!
Sir Bowie "who should have called these ramble thoughts since they ran on, and on, and..." of Greenbriar
Posted by dkWells