The Shirt of Hurt 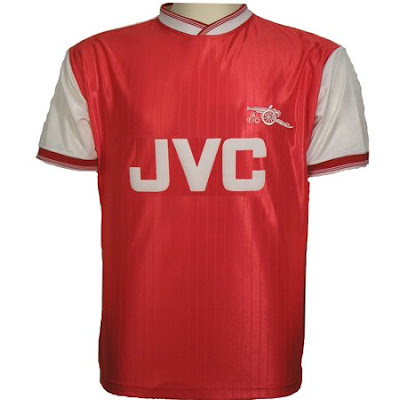 Anyone got a flaming match??
With Obama signing a new Nuclear treaty with Russia, so soon after pushing through the Health Reform and the GOP promptly throwing their toys out of their prams, it seems an ideal time to show the KMSA something that has been the talk of this island's menfolk this past two weeks. The Shirt of Hurt.
The Shirt of Hurt is the brainchild of Broadcaster Danny Baker on 5Live Radio (which is mainly a BBC Sports and topical debate channel), and was brought to prominence to raise funds for the Sport Relief Campaign to raise funds to help transform the lives of poor and vulnerable people, both at home and across the world’s poorest countries.
Soccer tribalism in this country is unbelievably fierce, and the premise of the Shirt of Hurt, was to be sponsored to wear the team Shirt of your bitterest rival and be photographed in it, and the longer you wore it the more money you earned.
This has sparked a wonderful good natured debate between strangers in Bars and pubs up and down the island. On the surface, to most grown up adult minded people it is no problem....or is it?
Sports shirts to a great many men define who they are and the way they think. From Heraldic times through the ages Men have shown their "True Colors"
The joy has been, watching on TV...known sporting celebrities, who have spent a lifetime playing and supporting a certain team from Childhood...(probably introduced to them by their fathers) wriggling in the glare of the lights as they are put on the spot when someone brings a rivals shirt on for them to wear.
Some Sporting celebs have paid large sums of Money so they Don't have to wear the Shirt of Hurt.
Me?, Well I figured I was more than mature and above all this nonsense and would happily wear any of my rivals Soccer shirts. I am a Chelsea supporter, and my most uncomfortable closest rivals are Arsenal. So if someone brought me an Arsenal shirt, (pictured at the top) or even a Manchester Utd , or Liverpool Shirt, would I wear them and a smile and without pulling a face as if I was sucking a lemon? The truth is...I could wear them, but not without pulling a big face.....don't ask me why...maybe its a guy thing.
So all you knights out there...whose Shirt, would five guys have to hold you down struggling as they put it on you? Which Team would you hate to don their colors and stand cheering in their fans end for five minutes?
In times of Charity, and Patriotism, and helping each other for the common good of man...most people here have good naturedly put their shoulders to the wheel, and this is why we have all been vastly amused at John "across the aisles" McCain's refusal to support any other legislation this year in the Senate. John better start wearing the Shirt of Hurt for Uncle Sam.
Sir D (who will be supporting Italy and Brazil in the World Cup because they play beautiful soccer) of O
Posted by dkWells