If You Can't Beat Them...Choke Them

Along with Arms manufacturers and Dictators in third world countries, cigarette companies have long been on my long list of people who I wonder, "How the hell do they sleep at night".

It seems denied the wholesale advertising, and even the public shunning of cigarettes in the West, the marketing boys have moved on to new more lucrative pastures and the mass markets in the far East.

It is pretty common to seen uniform ad placement on participants in most sports and public events here, but it might come as a bit of a shock to see a group of kids walking to school with advertisements all over their uniforms.

In KunMing Province, China, that is exactly what you are likely to see, as around 525 students have been issued sharp new orange uniforms covered in advertisements 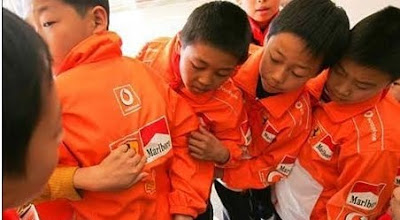 Students in Asia are required to wear school uniforms and it was obviously an opportunity companies like Vodafone, Shell, Ferrari, and cigarette company Marlboro, just couldn't pass on.

The parents were shocked to see that their children now looked like they were part of a Motor racing pit crew, but in China there is little the parents can say or do about the situation. 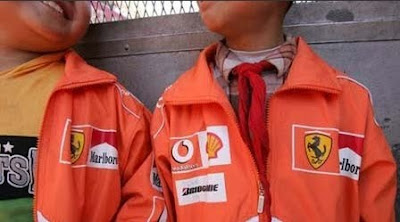 As a logo designer myself... I have to be aware that even I have played my part in the past, to promote all sort of carcinogenic products (and you'll note that I use the phrase 'in the past') and while I know that China itself is doing its bit to choke the world with coal fired powerstations, in a bid to catch the rest of the world up industrially, I still feel its a great shame when a relatively clean living, healthy eating, fit nation (sure, oppressed internally nation too) like China is polluted through their kids with our toxic trash in return.
Sir D (who drinks a beer to help him sleep at night) of O
Posted by dkWells