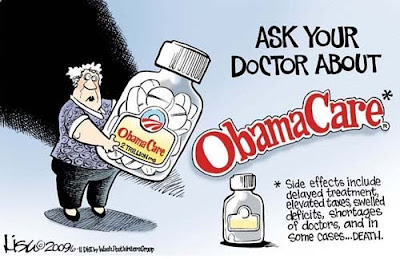 I honestly don't know whether or not this Health Care Reform / ObamaCare Bill is going to help me or just slightly injure me (if not kill me).

I do know that, to quote Vice President Biden, it is a "big f'ing deal!" How big? So big that it took President Obama 22 pens to sign. 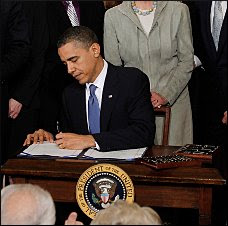 President Obama signs health care reform legislation during a ceremony in the East Room of the White House on Tuesday. At his left are two boxes of extra pens. (Reuters/Jason Reed)
In a longtime tradition, the president put his signature to the bill using almost two dozen commemorative pens, which were handed out to key congressional leaders and others who helped pass the legislation. It took the lefty more than 90 seconds to pick up each of the 22 pens and make a small portion of each letter in his name.
Sound like a joke? It's not. But, speaking of "Health Care" and "jokes," I present some here for the fun of it (most obviously written before Sunday):
"If conservatives get to call universal healthcare 'socialized medicine,' I get to call private, for-profit healthcare 'soulless, vampire bastards making money off human pain.'" --Bill Maher
"President Obama is turning up the pressure on Congress to pass this health care reform. In fact, he's telling Democrats, if they don't vote for this bill, he will go out and campaign for them in November." -Jay Leno
"The health care overhaul will extend coverage to 30 million people who are uninsured, or, as Walmart calls them, employees." –Jimmy Fallon
"There's a lot of controversy over this section of this new health care bill that says if you don't buy health insurance, you can go to jail for five years. They say it'll prevent freeloaders of the system. Yeah, but — well, if they do go to jail, won't they get free health care for five years?" –Jay Leno
"And the Postal Service announced last week the Post Office lost $3.8 billion last year. I've got a good idea. Let's put the government in charge of healthcare! Fantastic idea!" –Jay Leno
"The healthcare reform bill now includes a tanning booth tax of 10 percent. You know what this means? This whole thing could be funded by the cast of 'Jersey Shore.'" –Jay Leno
"Congressman John Boehner told a crowd of protesters yesterday that the new health care bill was the 'greatest threat to freedom he's ever seen.' And then the Taliban was like, 'Uh, helloooo? What?!'" –Jimmy Fallon
"Hey, the health care bill (is) 1,990 pages long and costs $894 billion dollars. Or $2.2 million per word. That makes them the most expensive words to come out of Washington since 'Mission Accomplished.'" --Jimmy Fallon
"Barack Obama has been working hard to push his healthcare proposal. Obama still wants the bill to be bipartisan, but he's a realist, and given the near unanimous Republican opposition he's facing, now says he'd be satisfied if the bill was just bicurious." --Jimmy Kimmel
"President Obama has been explaining his healthcare plan now to senior citizens. And yesterday, at a town hall meeting, he promised the crowd that he will not, quote, 'pull the plug on Grandma.' Then, there was an awkward moment when Grandpa stood up and booed." --Conan O'Brien
~Compiled by Daniel Kurtzman
Have a healthy day! 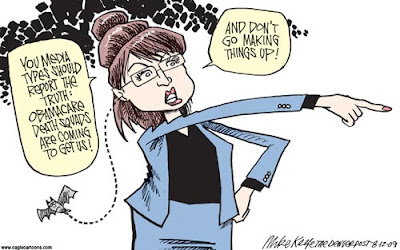