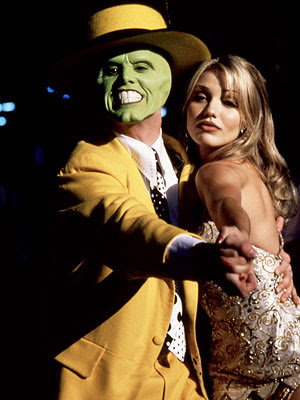 Jim Carey in the Mask just repeated a classic military technique on the park bench to Cameron Diaz when he said, "Like Napoleon, I will divide and conquer!" Of course he was talking about a different kind of division.
Divide-and-Conquer is as old as time, and still we never seem to be able to realize when it is being used against us, or even some times, by us.

Another classic example is made very effectively in the cartoon above about our relationship with Iran.

Yes, Divide-and-Conquer are as old as time. So is the quest for Unity-through-Diversity, the sacred battle cry of the Knights of Moleskine Spirit and Ale.
To quote some famous examples:
1) "Every kingdom divided against itself is brought to desolation; and every city or house divided against itself shall not stand." - Matthew 25:14
2) "A house divided against itself cannot stand." I believe this government cannot endure, permanently, half slave and half free. I do not expect the Union to be dissolved — I do not expect the house to fall — but I do expect it will cease to be divided. It will become all one thing or all the other. Either the opponents of slavery will arrest the further spread of it, and place it where the public mind shall rest in the belief that it is in the course of ultimate extinction; or its advocates will push it forward, till it shall become alike lawful in all the States, old as well as new — North as well as South." - Abraham Lincoln
3) "People, I just want to say, you know, can we all get along? Can we get along? Can we stop making it, making it horrible for the older people and the kids?...It’s just not right. It’s not right. It’s not, it’s not going to change anything. Please, we can get along here. We all can get along. I mean, we’re all stuck here for a while. Let’s try to beat it. Let’s try to work it out" - Rodney King

The same tactic is being used in politics today in regards to the attempts to reform healthcare. An article by columnist Tom Ehrich, an Episcopal priest, in the Indianapolis Star really caught my attention. He compares the current divide-and-conquer tactics to the same tactics used during the Woodstock days.

Woodstock was an example of classist divide-and-conquer

When the original Woodstock sprang up 40 years ago, my own off-the-wall adventure was taking place in Pittsburgh as I attempted to be a reporter for The Wall Street Journal. It was an uphill battle. I was a clueless young man taking a crash course in actual work.

I wasn't even aware that Woodstock was taking place in upstate New York. I was more concerned with Vietnam and being in the middle of a vast social upheaval that had little to do with a muddy field in Bethel, N.Y., and a lot to do with the exploding of cultural, economic and political land mines laid in the 1950s.

My Pittsburgh-centric window on that upheaval was watching steel barons preside over the self-destruction of the American steel industry because they were too smug to adopt new technology and to compete globally.

Social upheaval in the 1960s and '70s had nothing to do with bare-breasted stoners at a rock concert. That season of discontent was another eruption of America's ongoing class warfare, in which the wealthy relentlessly game the system, defeat opposing movements such as labor unions and civil rights, shower money on politicians, accumulate more assets than they need and guarantee that their cadre remains small and impregnable.

In this particular version of class warfare, the haves shine a spotlight of scorn on happenings like Woodstock, so that have-nots will resent their own children while haves make off with the loot. Blame discontent on rock music and wanton youth, they said, while the self-serving lay seeds for actual disparity and actual despair.

Let's get real here, shall we?

It wasn't public nudity that produced real estate bubbles and predatory lending. Nor was it dope that mired the seething majority in declining real income and took away the promise of steady employment.

It wasn't long hair that started mainline churches on a long slide into nonviability. It wasn't "flower power" that morphed America's finest colleges into a ticket to wealth, rather than an incubator for invention and wisdom.

Youths are always a convenient target. The real action takes place elsewhere: in political caucuses that divide up government largess and in executive suites where the normal risk-and-reward calculus gets untethered from accountability.

In this latest anger season in U.S. politics, cynical forces are again fanning fires of confusion and loss into wildfires of rage against the wrong targets. Such diversionary tactics trace to Reconstruction and the rise of the Klan, or xenophobic anti-immigration riots, or McCarthyism, or religious extremism.

Will we fall for it one more time? Or will we, this time, stop shouting, ignore those who are trying to make us angry, and look clear-eyed at broken systems that need our best efforts to get fixed?

Food for thought on this Saturday.

Sir Hook the Unifier of Warrick