Lucy of `Lucy in the Sky with Diamonds' fame

When I was growing up, we adopted a stray cat. My older sister immediately proclaimed it to be a girl and named "her" Lucy after the Beatles' song "Lucy in the Sky with Diamonds." It was only after the first trip to the vet that we discovered that Lucy was really a male. Oh well, the name stuck.

When Lady Suzanne and I were expecting our first child we knew exactly what her name would be. You guess it:


However, we had no idea what to name our second daughter. Nothing struck a chord until the name Lucy was suggested. On 9.11.89 Lucy Anne was born. Yes, named after an old Tom Cat, but also after Lucy in the Sky with Diamonds.

The song has a great deal of magical mystery, legend and myth surrounding it -- including Lucy Sky Diamond = LSD. But, Lucy was a real person -- and she died yesterday after a long fight against lupus.

The death of Lucy Vodden at age 46 has been announced by St. Thomas' Hospital in London, where she was treated. 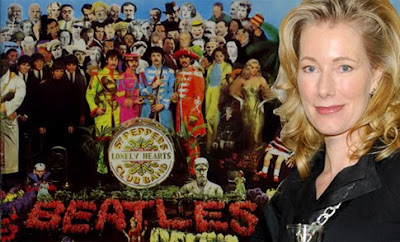 Herrera/Getty
John Lennon wrote 'Lucy in the Sky with Diamonds' after his son Julian drew a picture of childhood friend Lucy O'Donnell.

The hospital said Monday she died after battling the disease for years.

Vodden came to the attention of John Lennon when the Beatles' young son Julian came home from school one day with a drawing that he said was "Lucy in the sky with diamonds."

The elder Lennon turned it into a psychedelic masterpiece long associated with LSD use.

Julian Lennon reached out to Vodden in recent years as she suffered from the disease.