Ghost in the Tavern

So since the conversation about Hex signs led to a conversation about beer which led to a brief history of Allentown and since Allentown and Bethlehem are practically the same thing (and Easton, but that's irrelevant to this story, so we'll ignore it for now) I figured this might be as good a time as any to share a story I heard in Bethlehem about the Sun Inn and the haunting of same. 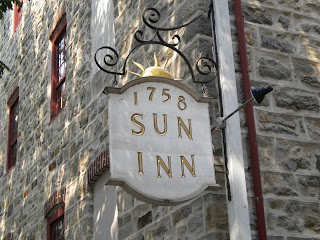 The Sun Inn, located on the main drag in Bethlehem PA, has been in service since before the American Revolution. (In American terms, my fine friends from across the pond, that is very very old indeed) some notable dates, according to the Sun Inn's website, include:

During our visit, we learned that many notable people had visited and accepted the hospitality of the Sun Inn. We visited some of the guest rooms and suites that had housed them. Yep. George Washington slept here. 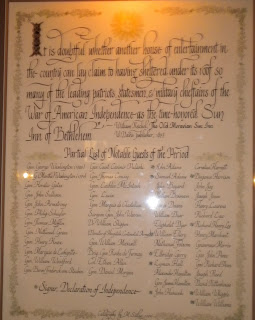 Now we learned all of this when we visited this summer. But what really caught the attention of our kids was this: 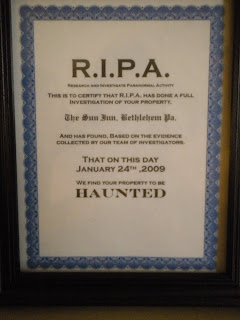 That's right. The Inn has been declared officially haunted by R.I.P.A. - Research and Investigation in Paranormal Activity. And this Halloween, for the first time since the 1960's, people will actually be allowed to sleep at the Inn hoping to spot a spectre. It's rumored to have a few. According to The Morning Call:

RIPA Members say they have had their pants leg tugged, their hat tapped and their hair pulled. A camera left recording in an empty room was mysteriously knocked askew.

It is the tangible evidence of strange happenings that is the most exciting for the group. And there is plenty of strange evidence.

Recordings done in the first floor room, known as the Gas Tube, includes a spectral voice singing along to the hymn ''A Mighty Fortress is our God,'' and an exclamation of ''God Save the Queen'' after the British national anthem was played on a harpsichord in the corner of the room. In another recording, the voice requests ''play the piano'' and says his name is ''William.''

Members speculate that the music-loving spirit is William Jones, who was secretary of the Navy under President James Madison and died at the Inn in 1831.

Now old Bill isn't the only apparition who has made his presence known at the Inn over the past couple few years. There's a little girl who has been mentioned. And there have been strange figures in the windows. I don't know if I believe all of this or not, but I DO know that I won't be making any reservations at the Sun Inn anytime soon.

Lady T ( I do believe in spooks, I do, I do, I do) of the living
Posted by dkWells