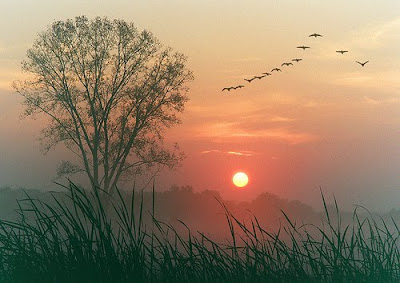 Ever since I was a child, the call of early morning has always stirred my soul. No matter if I'm up all night, or go to bed late...the call of the Mysterious Dawn rings it alarm and stirs me to join the forces of the universe.
The Mysterious Dawn is a special time for me. Not bothered by the cares of the day or responsibilities to others, I mount my Soul's Surf Board to ride the Cosmic Waves that move and bathe me in their gentle yet powerful movements.
I first discovered the Mysterious Dawn when I was five years old. It was the first time that I spent the night at a friends house. It is also when I discovered that most kids my age slept till noon. After trying in frustration to wake my friend, I gave up and went outside to watch the darkness turn to light. It was a powerful experience. I felt like the King of the World, alone as if all I surveyed was my private playground. This was my first awakening to the Mysterious Dawn.
I delivered newspapers (before the Internet was invented by Al Gore) in grade school through High School in order to ride the streets of Fairfield, just me and the Mysterious Dawn, dreaming dreams that someday would become reality. (Take note Sir D, an important by-product of living in the future during the now!)
Today, I ventured into the Mysterious Dawn and ended up at the Coffee Cottage across from the University of Evansville and joined Sir William of Keglers and Sir Seamus of Marion in an impromptu Knights gathering.
When do you connect with the Universe?
Sir Hook Who Moves in Mysterious Ways of Warrick
Posted by dkWells