In the Spirit of Sir Bowie's previous post where he resounds the age old and very accurate phrase, "A picture is worth a thousand words.", we'll keep the words to a minimum and let the pictures do the talking.
7 years ago on Halloween I had a very real horror story when I had my chest cracked open, ribs raised and spread and my heart exposed as I was given new life in Frankenstein's Laboratory. 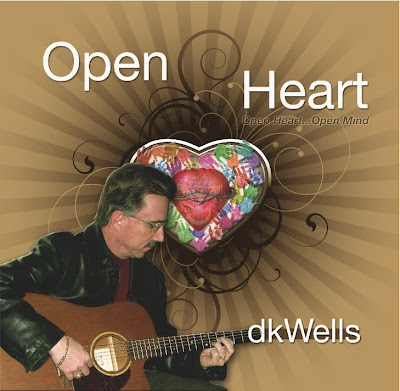 The experience changed my life literally, and I have documented the journey in a body of original work soon to be released on CD titled, "Open Heart-Open Mind". Therefore, Halloween, All Souls Day, All Saints Day, The Day of the Dead is a particularly poignant time for me to celebrate life, love, and a open heart and open mind! So, I give you Sir Hook's Cast of Characters! 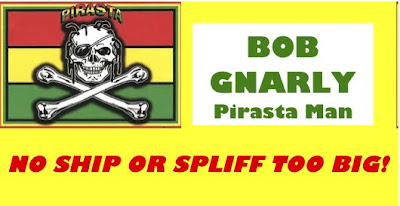 Sir Hook's calling card for the evening as "Bob Gnarly, Pirasta Man"...No Ship or Spliff too big to take on! 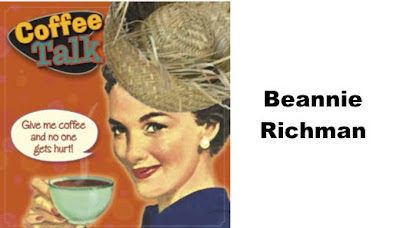 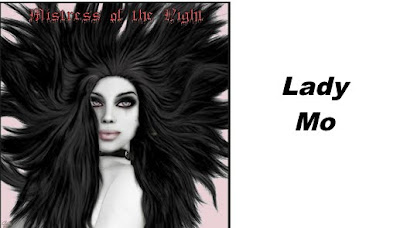 Lady Mo of Chicago as "Lady Mo...Mistress of the Night! 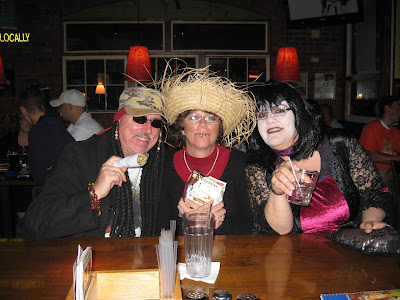 And here's the starring cast at their first stop, the KMSA Sacred Watering Hole...and where it all began...Old Chicago. 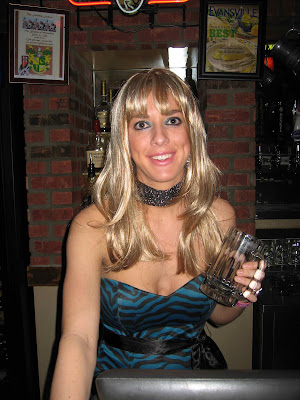 We had the fortune to have Hannah Montana as our bartender! Notice the KMSA Sacred Watering Hole plague over her shoulder. 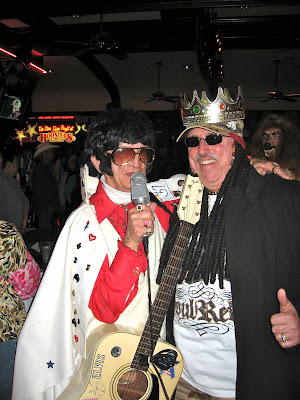 Here's the Soul Rebel with the "King" at Casino Aztar's Hoosier's Lounge...Stir it up Mr. Memphis! 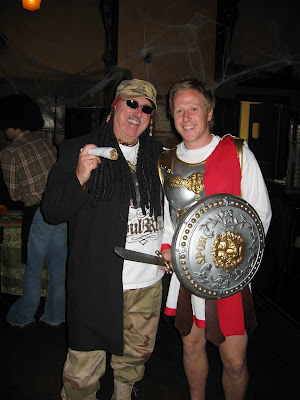 Bob Gnarly and Caesar debate which is bigger, the Spliff or the Sword. Note to Sir D, this is Chris the Geordie bartender at RiRa's. 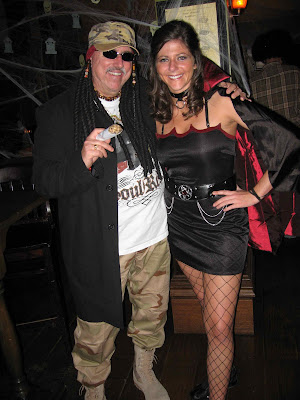 Bob Gnarly with our RiRa "Batty Waitress". I'm a fool for your stockings I do believe! 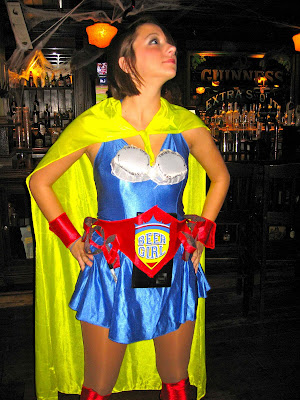 Another RiRa Waitress...BEER GIRL...striking her super powers pose! Complete with twist cap brazier...I didn't ask her how many times she's been tapped! 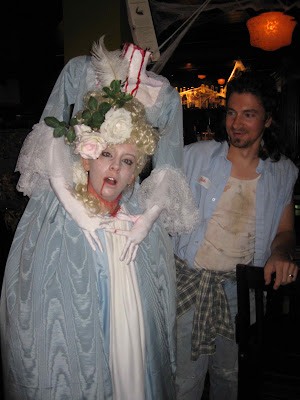 Of course we had the distinct honor of partying with French Royalty and the 18th century original "Party Girl", Marie Antoinette! 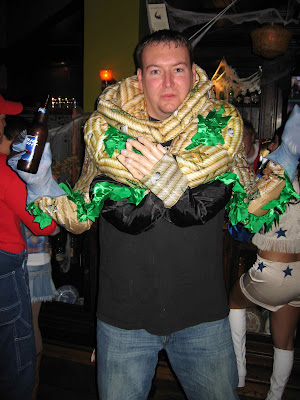 Here's the Creature from the Deep surfacing for a few Bud Lites! 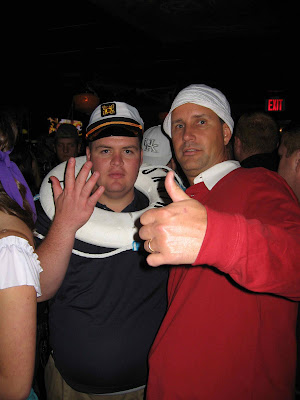 I think he was actually following the Skipper and Gilligan to claim a few more victims for Davy Jones' Locker! 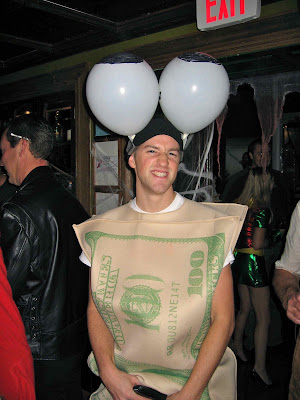 We took a wild guess and was correct...I give you the inflation bug! 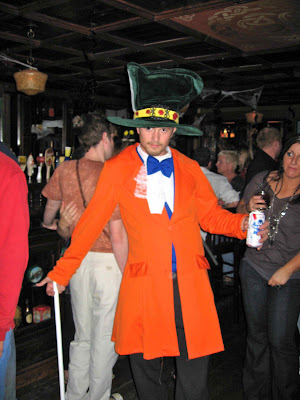 The Mad Hatter appeared, forgoing his taste for Oxford brew for a PBR! 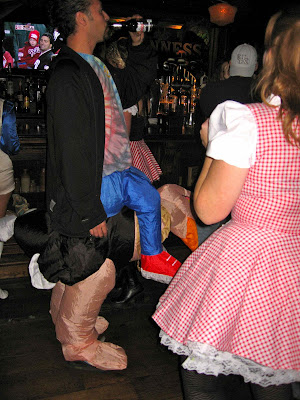 This lucky gent was riding his Ass to the bars last night! 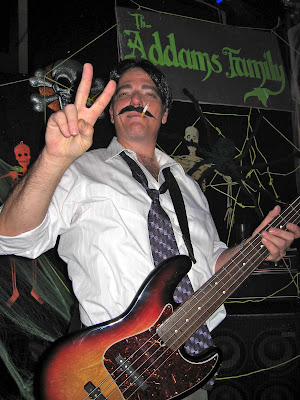 We ended the evening at O'Brien's Pub where one of our favorite bands and good friends, Rachel and the Jimmies were playing as the Adams Family. Here's Rob as Gomez. Rob plays bass on my CD. 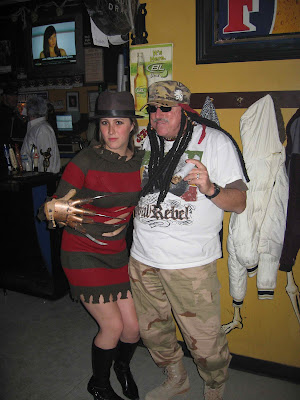 Bob Gnarly gets down with Francine Kruger! 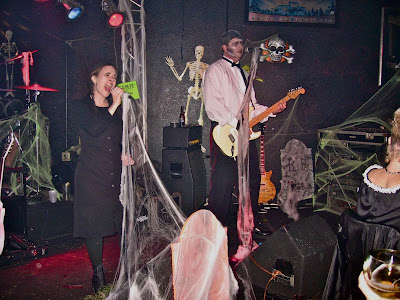 Here's Rachel as Wednesday and Dave as Lurch belting out a tune! 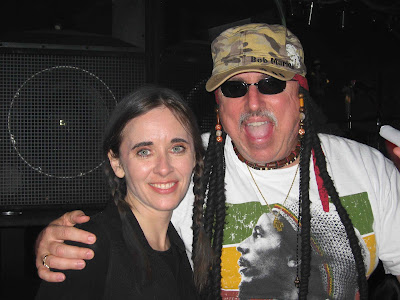 Rachel, or Wednesday, packs a powerful punch in such a small body! She sings on my CD. Her husband Jeff played guitar with me and helped me produce. We go back 25 years! 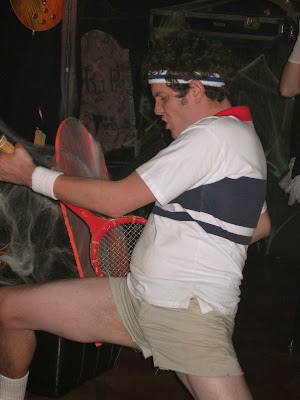 Finally, John McEnroe makes a winner after arguing the call and celebrates by playing air guitar with his wooden tennis racket. Remember those?
So, there you have it. A small visual tour of another great Halloween evening!
Sir Hook the Gnarly Man of Warrick
Posted by dkWells