It always pays to remember to take your camera to Oxford, as there is always something happening downtown that you end up kicking yourself for,if you don't take one. 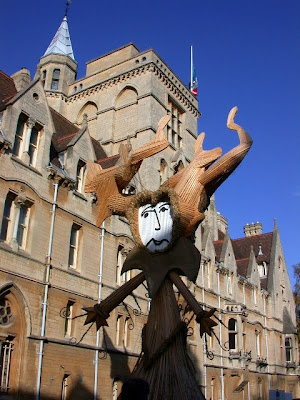 This time it was something that coincidentally follows on from Sir Hooks splendid Blog ; Bonfire of the Vanities :24th Oct 2009. regarding trying to change history by burning its writings, and the mention of King James 1st.
As I outlined in my KMSA Blog: Guy Fawkes: 5th November 2008
We in the UK, have celebrated Fall Bonfires for centuries, then 400 years ago we started to include the burning of the effigy of Guy Fawkes one of the Catholic Conspirators that tried to blow up the Protestant King James 1st in the Houses of Parliament, in the Gunpowder Plot of 1605.
Over the last few years, political correctness has meant that the whole event, has inch by inch, been whitewashed over into being called just Firework Night, with the term Guy Fawkes and the building of his effigy pretty much airbrushed out of everything except maybe in far flung rural areas.
It all naturally comes under Hooky's winds of change and I suppose it must have seemed bizarre trying to explain to small kids about the burning of a Catholic etc...(but then it didn't to me)
But, its seems we Brit's have a hankering for burning down some kind of human figure, so you can imagine my great amusement this afternoon to find a huge Wicker Man (pictured above), stood in Broad Street outside Balliol College.
(super-ironically on the very same spot where the Protestant Martyrs; Latimer , Ridley and Cramner were burned at the stake by the Catholic Queen Mary the 1st) 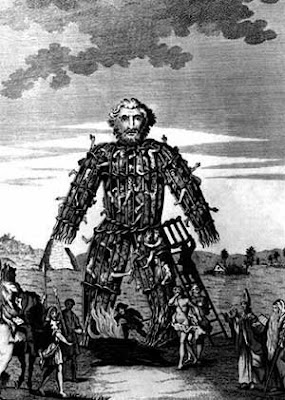 18th Century Wicker man
Wicker Men were a large wicker statue of a human used by the ancient Druids (priests of Celtic paganism) for human sacrifice by burning it in effigy, according to Julius Caesar in his Commentary on the Gallic Wars. In modern times the figure has been adopted for festivals as part of some neo-pagan-themed ceremonies, notably without the human sacrifice element. 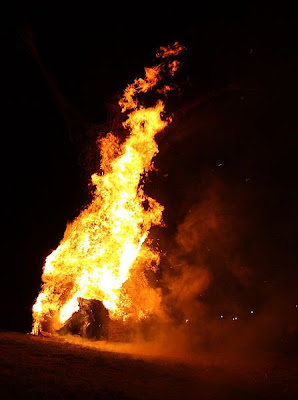 Wicker man on fire at the Archaeolink outdoor museum, Oyne,, Aberdeenshire, Scotland
Today's particular Oxford Wicker Man, built especially to set alight at the City's major Firework display on South Park Hill on November 7th, was the winning design, by Joshua aged 7, in a competition that apparently had been opened to all the school kids in the county, for them to draw a Wicker Man that would be made by craftsmen, who were all surrounding it as I took the photo, collecting for charity in buckets.
See it being made at; www.wickermanoxford.co.uk
So there we have it, we have gone from having to explain the burning of a religious terrorist to children, to explaining the neo-pagan activities of our forefathers, which doesn't actually worry me none, its just the way that the powers that be, have gently slid one bit of history out from under our noses and eased another in. In a few generations us oldies who were brought up to love the sound of Guy Fawkes name, will die out...and then they will burn the books.
Sir Dayvd (the Corn Dolly) of Oxford
Posted by dkWells