Perhaps there is one benefit of global warming (real or not) that we can all drink to: As the ice caps melt, the Japanese get to enjoy really good beer (good is relative).
From the great North of Japan, Hokkaido, comes Okhotsk Blue, from Abashiri Brewery. 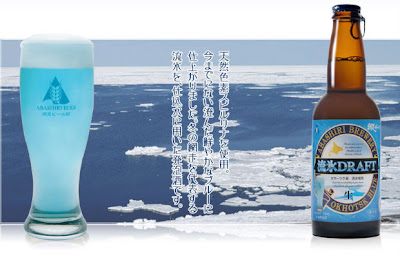 Yes, BLUE BEER!
From what I'm reading,The Okhotsk Blue Draft is not just beer with food coloring; it's one of the most unique beers around. Chief among its odd sources is water from melted icebergs that float to the Hokkaido beaches from the Sea of Okhotsk, an area in the Pacific Ocean near both Japan and Russia. The Abashiri Brewery achieved the attractive hue by adding blue seaweed into the mix.
And, Abashiri didn't' stop at blue. Some of their most popular beers include RED Hamanasu Draft, GREEN Shiretoko Draft and PURPLE Jyaga Draft (The concept for this line revolves around the four seasons and the Okhotsk Sea, an icy arm of the North Pacific Ocean bordered by Japan and Russia). 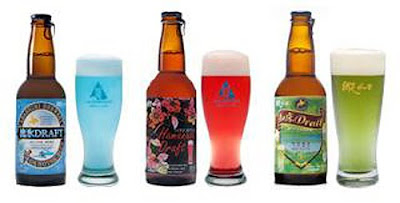 According to one on-line source: The line of rainbow brews are not Abashiri's first wacky beer endeavor, however. The brewery made headlines in 2007 with its somewhat less appealing (but nonetheless intriguing) Bilk, a malt beverage made from 70% beer and 30% milk. 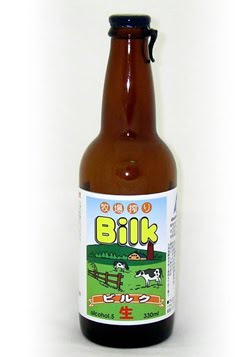 The idea came about after declining milk consumption in Japan left a surplus of milk. To avoid wasting it, liquor store owner Chitoshi Nakahara proposed Bilk as a solution. Unfortunately Abashiri no longer produces Bilk (perhaps it succeeded in eliminating the surplus...or inducing projectile vomit), but you can purchase the multicolored beers on the company's Web site.