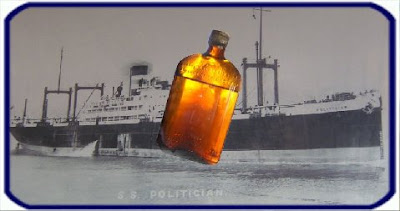 A BOTTLE of whisky from the wreck of a cargo ship which inspired the film Whisky Galore! was sold for £2,200 yesterday.

The bottle of Ballantine was expected to fetch in the region of £1,500 at auction.

But strong competition pushed its price up – until a teenager fascinated by the remarkable story put in the winning bid.

It was one of 240,000 bottles of whisky which sank when the SS Politician ran aground off Eriskay in the Outer Hebrides in 1941.

For weeks the islanders celebrated by hiding the looted bottles before government officials could find them.

The sinking of the SS Politician inspired the novel Whisky Galore! and later the 1949 Ealing comedy film of the same name.

The bottle was sold to the family of 18-year-old gap year student Tam Burt, from Dollar,
Clack-mannanshire, in a commission bid placed at Gorringes auctioneers in Lewes, east Sussex.

Speaking from Paris, Tam said he enjoyed reading the novel, written by Compton Mackenzie in 1947, and it had played a large part in his education.

He said: “I really enjoyed the book as a child. Later I won a scholarship and on that I investigated the original story by travelling to Eriskay and the Politician pub named after the vessel.

“When I saw the bottle was up for auction I decided to go for it. In my opinion the bottle was grossly undervalued. But you won’t find it being drunk. It will stay untouched.”
In 1970 a team of divers, including Bob Pert, were commissioned to locate the wreck and retrieved six undamaged bottles of Ballantine. Mr Pert, 61, was allowed by the Receiver of Wrecks to hold on to the only uncontaminated one as a keepsake and it has remained unopened.
Mr Pert, of Seaford, east Sussex, said: “I’m very pleased with what it went for. I didn’t think many people would pay much for what is at the end of the day just a bottle of whisky.

“But people appear to like the story behind it and I’m delighted. I’m sure my family will be wanting a cut of the proceeds now.”

Francesca Collin, spokeswoman for Gorringes, said: “It appears to have caught the imagination of everyone who heard the story.”

Although a couple of inches of whisky have evaporated through the cork, Mr Pert said it should still be drinkable because the seal is intact.

He said: “We spent three weeks searching for the wreck and were just about to give up when we were given a tip by a local to its whereabouts.

“Diving technology in those days wasn’t anywhere as sophisticated as it is now, so we had our work cut out to find anything.

“We were literally on the last roll of the dice when we saw this case just sitting there.”

So Knights I'll leave you to bring your own philosophies to the table on this one... and to raise a glass to getting lucky on occasions.