Once in a Blue Moon

There is a saying often used around these parts... "Don't knock it till you've tried it", as a response to anybody who is negative, especially with weird or off the wall subjects.

Of course one of my favourite sports that gets me out of bed these days is to rib Hooky and Bowie about the girlie nature of American Beer...and then sit back and listen to their cages rattle, as they drool and strain at their leather fetters...desperate to get their gums round the rims of a few pints of Heavy, and put an end to this barguement.

The fact that being Americans, and coming from a gene pool of people who were hardy and curious enough to leap onto boats at the mere thought of a Promised Land, makes them a proud and feisty breed, who don't take kindly to having their nationhood poked with a stick from across the water. They forgot tho, in their hurry, to take irony over with them as well as the Beer recipes.

Recently they have been fighting back in a new "If you can't beat them join them " kind of way. For the passed twenty years the US answer was to flood out the UK market with cheap bottles of Bud and numerous other dreadful corn beers, usually with an "exotic" Americana TV ad... but with the dumbing down of the Union, by the Bush Dynasty ( ironically from possibly the most macho of the US states ) the pendulum of Beer taste is swinging the other way, British and European Ales are on the up... Flavor is back, and i am increasingly getting reports from the La -Z- Boy's of Indiana, of mysterious Craft beers and Macro beers. ( you can't beat the simple description of a beers' flavor to get the juices of a beer drinker going )

So my own curiosity was itself aroused when I saw on the top shelf of the beer aisle in my hypermart, a small blue labelled bottle, marked North American Craft beer. 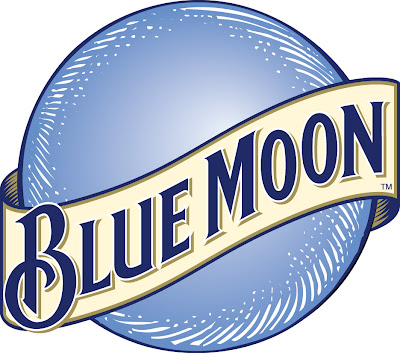 I decided not to read the label... but instead just to buy it and try it as a "blind" taste session.

Well I am pleased to report that it was very tasty. A Belgian-style witbier , made with pale malted barley, wheat and oats, and mildly spicy American Hallertau hops, spiced with a bit of orange peel and coriander. Cloudy, and unfiltered, and looking like rusty tap water, it is from the same family of beers as the Hoegaarden White Beer I am fond of guzzling here on hot summer nights.
Naturally I decide to check out this www.bluemoonbrewingcompany.com and was initially amused to see the whole site had been set up to look like someone had thought all this idea up using Moleskine Books, as every thing was drawn up and made to look oaksy and folksy and as you would imagine a craft beer to be ....made by some ornery old hop smelling genius in a sawdust strewn loft in the backwoods of the Midwest.
Sadly, with a bit of probing I find this particular beer wasn't made in a tiny brewpub somewhere, but brewed by Molson Coors, the nation's third-largest brewery (after Anheuser-Bush and SABMiller). And sales of Blue Moon White Ale last year approached 800,000 barrels, more than 2.6 million, 12-ounce bottles.

Puts those of us who like to disparage big brewer, rice-and-corn- lagers such as Budweiser and Coors Banquet in a tight place. In one sense, of course, no way is Blue Moon a craft beer. It's a factory beer from a giant brewer, even though Molson Coors doesn't actually advertise its connection to Blue Moon.

But on the other hand, this is excellent beer: Dry, mildly spicy nose, hint of orange and summer fruit and a crisp taste of clean malt with a tart finish and a gentle rush of drying coriander.

Certainly Blue Moon shows mainstream Americans are picking up on the idea that beer can have flavor, and it is a step in the right direction... and like Ol' MLK, I too "have a dream": That the day will come when those tasteless lagers we like to rag on from the shires of England, will be America's ancient history, replaced by foaming tankards of Brown Ale and Mild. and stouts and Porters, and glorious Scottish Heavys..