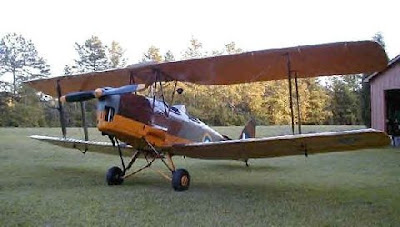 LONDON (AP) - A British pilot said he ran into an unusual hazard while making an emergency landing - a cow. Rob Wotton said he was trying to land his World War II-era Tiger Moth after the engine stalled just after takeoff southwest of London on Sept. 14. He was about to touch down in a field when the animal wandered into his way.

The brown-and-white cow was knocked to the ground by the plane's lower left wing. The two-seater was damaged but landed safely. The Cow was "apparently uninjured"

I fire up the computer this morning, to find this amusing tidbit from Sir Hook. Amusing..not only that a biplane clonks a cow, this island is pretty stuffed with such eccentricity, with many two seater Tiger Moths still flying and giving people their first flying lessons.

What did make me smile, and has done whenever I travel abroad, especially the USA... is the scale and perception we each have of our own countries. The news report says "Southwest of London", so i'm quickly thinking..oooh I wonder where that is...? drawing a mental line a few miles out of the Capital... Richmond.??... ermm Ealing?? Heathrow?? I look into it further by clicking on the accident report url. Dunkeswell Airfield, Devon. DEVON!!! Devon is a County in the far South West of our island. ( the jutty leg bit underneath Wales, if you now have your UK map unfurled ) Of course the AP in the US, are technically correct...but even in my position of being an hour WNW of London, Devon is a holiday destination to us, with a three hour trip to get there.

This ties up with when i come to US, a two hour trip out is often just to go have a drink in a bar of an evening, especially in the mid- States, and they will think nothing of gunning the V8 up onto the Interstate to go pick up some Ice-cream. This compared to the fact we cycle and walk a whole load of places, a fact that caused many an eyebrow to be raised in PA.

That said, I am forever asked by New Worlders, to say Hi to the Murphy's, back home in Bristol (90 min drive), or the McClouds in Chiswick ( London suburb ) as if I am a neighbour, when reality is that there are more people in one small county here than in the whole of Montana, Kansas and Wyoming combined.

So that's the Perception. There was one other thing that Hooks piece triggered, and that was my Memory.

Between around 11 -14 years of age, I was in the local branch of the Scouts. One of my favourite Summer Camp destinations they used to take us screaming kids, was the beautiful island of Alderney, part of the British Jersey/Guernsey archipelago that sit like giant aircraft carriers 8 miles off the coast of Northern France. 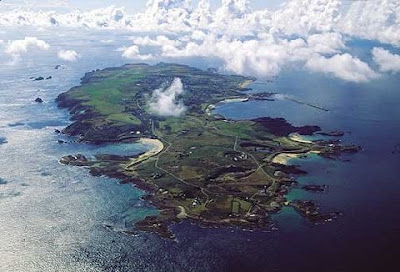 Alderney is about 3 miles long and 1 mile wide, and chock full of sunshine, beaches, and best of all, dozens of Napoleonic forts and castles that were built on each headland to repel the old French tyrant. 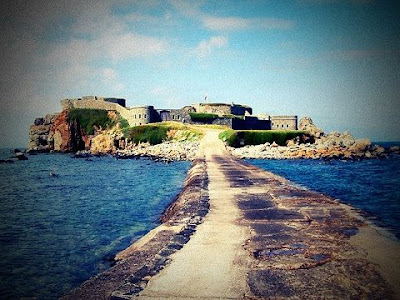 I'll leave you to imagine what adventures a horde of boys, hundreds of miles away from their parents got up to, and bring this indulgence to the point of why my mind was suddenly engaged in reverse..

In flying from Southampton to the tiny Island in the Hopper aircraft, my vivid memory is of the Captain, halfway over the English Channel, radioing the "airfield" and requesting that they take the herd of cows off the grass runway, and then we'd find that as the wheels touched down with a bump and a lurch and our excited faces peered out of the windows, there would be several dozen beige Guernsey cows, all individually roped to tethers along the perimeter, like some bovine welcoming committee.

As the quote goes:

'Memories sleep, until a word, a sight, a sound, awakens them'