Toby or not Toby, That is the Question! 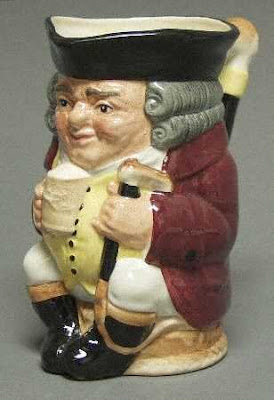 This evening while watching TV over dinner, I chanced apon an antiques programme that showed the making and history of that quintessential English beer related item, the Toby Jug, or Toby Mug, and I wondered why I'd never thought to write a KMSA blog on them before, and then in a pause of deja vu, I wondered if I actually had. Still it was interesting researching these fun items and in doing so I discovered a startling twist to the whole story, that I will reveal at the end of the blog and sit back and await confirmation from the FF's, to see if it is true, or just a figment of Wikipedias imagination.
Toby jugs are popular around the world and always associated with England. Many English Pubs have adopted the name. The first Toby Jug, was developed and popularised by Staffordshire potters in the 1760s. It is thought to be a development of similar Delft jugs that were produced in the Netherlands. Similar designs were produced by other potteries, first in Staffordshire, then around England, and eventually in other countries.
It was a jovial, seated, male figure, with a mug in his hand and a tricorn hat which made a pouring spout. He was dressed in clothes of the time; a long coat with low pockets, waistcoat, cravat, knee breeches and buckled shoes. 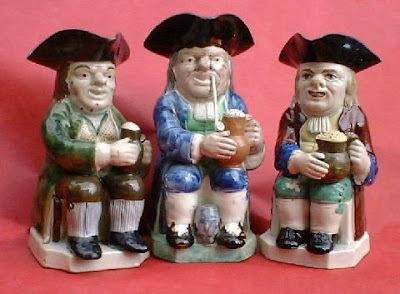 No one really knows why he was named 'Toby' although it is possible he called after Sir Toby Belch a character in Shakespeare's Twelth Night. Or maybe it was after a song popular in 1761, around the time the jug was first produced in a traditional, brown salt glaze version. The song 'Brown Jug' featured 'Toby Fillpot'. and they are also sometimes known as a Fillpot (or Phillpot)
For the purposes of the blog I have stayed with the photos of the classic antique Toby's, but naturally, in a commercial world an endless parade of Toby style characters have been created since; from Hitler to Santa Claus, and covering every possible feature and famous face inbetween.
Jugs depicting just the head and shoulders of a figure are also referred to as Toby Jugs, although these should strictly be called "Character Jugs". 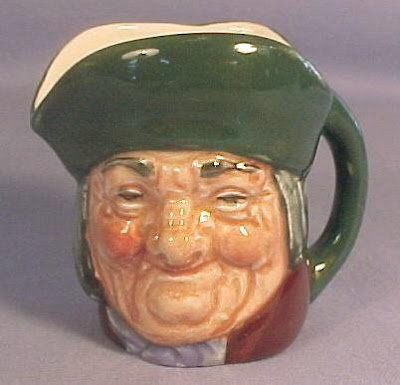 So this is where I unveil my intriguing twist, because in the Wikipedia account of Toby Jugs ( under Jugs ) it claims that...... " Toby Jugs are collectible". and that "Indianapolis Colts quarterback Peyton Manning is the most high-profile collector of Toby Jugs, with his collection said to be the largest in North America." (Is this actually True???? I ask my esteemed drinking friends in Hoosier land) If it is it is an amazing beer related fact, if it is not then i have found my first Wikipedia falsehood. 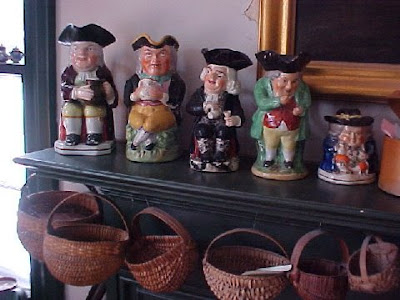 That aside....The American Toby Jug Museum is located on Chicago Avenue in Evanston, Illinois, if you boys are ever up that way.
So I am now on the hunt in flea markets to find a quality original Toby Jug, in which to put my ale, and toast the long line of drinkers from down the years.
Sir Dayvd Belch of Oxfordshire
Posted by dkWells