Our Cross to Bear 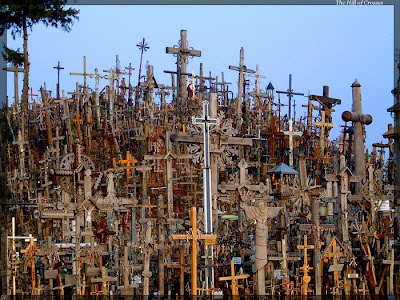 Attached is a very cool photo (one of many I found) of The Hill of Crosses in Lithuania (unknown photographer).

According to one web site, the hill has more than 50,000 crosses on it (and is not a cemetery).

“The reasons for the crosses to be there is that there is a story that each one who would put his own cross on this mountain would become a lucky guy, so thousands come here and install their custom crosses.”

It’s been said that this tradition appeared before the Christianity came to Lithuania and Russia and is of pagan origin.

I saw this photo around the same time that I received the latest Paulo Coelho newsletter. Coincidently, it contains a story about crosses:

In a certain village in Umbria (Italy), there lived a man who was always bewailing his lot. He was a Christian, and found the weight of his cross too heavy to bear.

One night, before going to sleep, he begged God to let him change his burden.

That night he had a dream; the Lord led him to a warehouse. "Go ahead and change it," he said. The man saw crosses of all sizes and shapes, with the names of their owners. He picked an average size cross – but when he saw the name of an old friend written on it, he left it aside.

Finally, as God had permitted, he chose the smallest cross he could find.

To his surprise, he saw his own name written on it. (end)

Something for Knights to Think about.