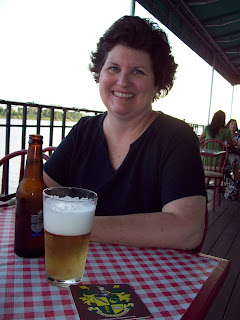 Lady Suzanne and I celebrated our 24th Wedding Anniversary last night. We haven't gotten out much in recent years, so we opted to have a quiet dinner, take a walk along the Ohio River, and visit the old neighbor bar where we used to hang out and where, 25 years ago, we got engaged.

On our honeymoon, we stayed near a lighthouse in Jupiter, Florida. Across from the lighthouse was a great restaurant/bar where we'd go and drink beer and eat homemade bread. So, in honor of that memory, we headed to the water – with a glass of Bass Pale Ale for me and a much-less-than-pale beer for Suzanne. We watched the sunset in the west and the moon rise in the east. 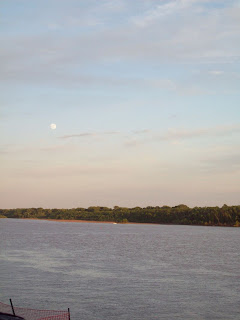 Next, we headed to The Duck Inn. This is a neighborhood tavern that, 25 years ago, was one roach short of being closed by the Health Department; However, in addition to being full of roaches and god knows what else, it was always full of colorful characters who drank copious amounts of fish bowls/schooners of beer (Pabst Blue Ribbon on tap) and sang off-color songs at the piano bar. It was truly a place where everybody knew your name. Late one Saturday night -- or more likely early Sunday morning -- while playing pinball, I asked Suzanne to marry me. Damn, Les the bartender and Daisy the waitress threw one hell of a party the rest of the night and morning. 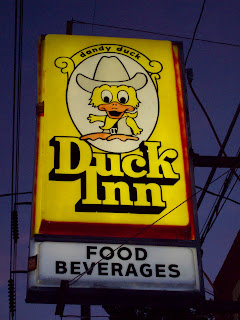 They say that you can't go back home again. Last night, we did. Sadly, there are no more piano bars, no Les and Daisy, and no pinball machine. 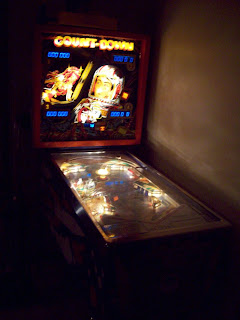 About that last item. A few years after we were married, I went back to the Duck Inn only to find that THE pinball machine was long gone. It seems that the old “5 ball for a quarter” machine had become outdated. A drunk at the bar thought that he had seen it in a bar downtown. The hunt was on: There, they said that the vending machine company had taken it away. The company said that they sold it to a guy who fixes up old machines. The guy who fixes them up said that he'd gladly sell it to me – for a price. So, for an anniversary surprise, I bought it for Suzanne. Over two decades later, it still holds an honored place in our home. 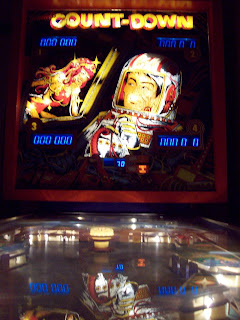 One beer at the Duck and we were off for home. Not exactly the most romantic sounding adventures, but it's our adventure. Hope you don't mind my sharing it with you.