I remember my first trip the the Owensboro Country Club with my future in-laws. I ordered a bourbon because 1. I was in Kentucky, the birthplace of bourbon and 2. I didn't want to seem back-woods, lower class Hoosier (which I was! Well, not the back-woods part). Had they had "luxury beer" back then, I would had preferred one of those.

I soon got over the fear of drinking beer in from of the new family and their club friends after I realized that these people put their pants on one leg at a time like me -- only they had a lot more money in their pockets!

All this is a build-up to a story about a "beer fit for a queen!" June is the 55th anniversary of the Queen's coronation, and Foster's sent her a gift-wrapped bottle of Crown Ambassador Reserve lager, the first from a limited release of 5000 champagne-style bottles to be sold at $60 each. 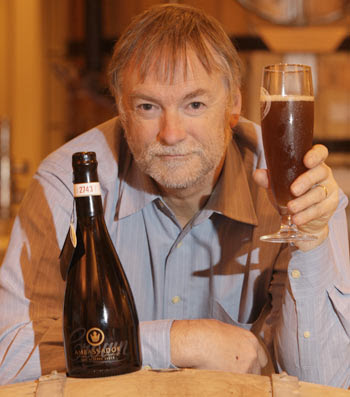 According to one article I read by Mike Gribble, "the gesture is a crafty marketing hook to launch a new drinks category Foster's master brewer John Cozens calls "luxury beer".

"It's expensive to make and it's expensive to package but it's Australian, it's luxury and let's hope there's more to come," said Mr Cozens, originally from Yorkshire and a brewer for 39 years.

The launch emulates a similar move in 1954, when the premium beer market was pioneered with the announcement Crown Lager would be made available to the public upon the Queen's first visit to the country.