According to mythology, Persephone ruled as the Queen of Hades when Pluto, God of the Dead, absconded with her for the nether world. Persephone’s mother was Demeter, the goddess of grain. Demeter’s Roman equivalent is Ceres, the goddess whose name gave us the word ‘cereal’ and the Latin root word for beer yeast, ‘cerevisiae.’

Being the goddess of grain and fertility, Demeter failed to produce any crops while she mourned the loss of her daughter to the god of the underworld. Eventually, Zeus, the supreme god of the Greeks, convinced Pluto to allow Persephone to return to her mother. But before she left, Pluto fed her a few kernels of pomegranate. The fruit was so sweet that Persephone agreed to return to Hades for part of each year so she could enjoy its succulent seeds.

So, what's all this have to do with our Knights of MSA? Beer! Pomegranate beer to be exact.

Shmaltz Brewing has combined the many elements of this myth - pomegranate juice, grains and yeast – and created Origin Pomegranate Ale (8.5% ABV). This ale is pink and is described at she-devil sweetness and complex. 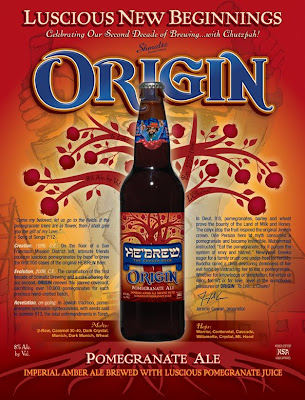 Here are a few lines from the Origin label: 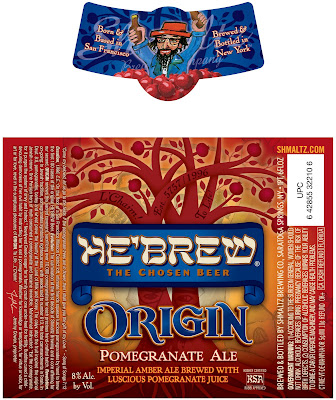 In the Greek myth of Persephone's abduction by Hades, lord of the underworld, the pomegranate represents life, regeneration, marriage, perhaps the seasons... contradictory versions, way too convoluted for a beer flyer- google it! • St. John of the Cross made the pomegranate seeds the symbol of divine perfection. • The Pueblo believed that those who witnessed the ingestion of the arils were blessed with powers of divination. • In China the pomegranate is widely represented in ceramic art symbolizing fertility and abundance.

Since the rind of the fruit is tough, but the juice sweet, the pomegranate came to symbolize the priest; severe on the outside, indulgent on the inside. • In Christian art, the pomegranate often found in paintings of the Virgin and Child symbolizes resurrection and life. • The Qu'ran mentions pomegranates three times - twice as examples of the good things God creates, once as a fruit found in the Garden of Paradise. • In some parts of the world, it's believed that Eve tempted Adam with a pomegranate (No, the Bible doesn't say “apple”).

So, having read all this, my quest (“quest,” there's that word again) is to find a bottle of Origin this week and enjoy in the heat and humidity of Indiana summer.