I know that many of you Knights out there are artists or work in the advertising field (or both).

This short story involves both. 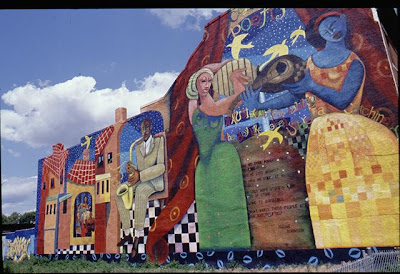 I didn't know this, but Philadelphia is known for colorful murals of famous people and places.

It seems that Pabst Brewing Co., which produces Colt 45, has placed graffiti-styled ads for their beers around Philadelphia. The ads show comic book-style characters clutching bottles and cans of Colt 45. "Works every time," reads the slogan. The ad's gray-and-white adult cartoon characters are shown holding golden cans and bottles of the malt liquor. In the corner, the small print reads, "Yo, enjoy our frosty malt beverages responsibly!"

According to an AP article: “A nonprofit anti-billboard group, the Society Created to Reduce Urban Blight, has complained to city regulators, saying the ads should be removed because they are in areas not zoned for advertising.” And, “ Mary Tracy, executive director of the group, said they are particularly offensive in a city known for murals of famous places and people, from Frank Sinatra to Malcolm X.” 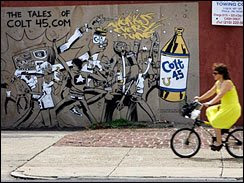 Bottom line. A lot of people have taken offense to the “artful ads” and are demanding them taken down. What do you think? Effective advertising? Urban blight? Art?

Something to think about.