A Knight in June 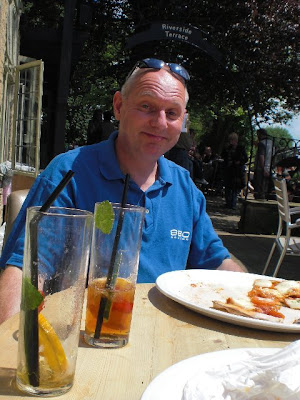 This man is full of Pimm's No 1 Cup with Elderflower Lemonade, and Margharita Pizza,as he soaks up the rays at the Trout Inn near Oxford.

Knights,....While Sir Hook and Lady Allwinky and Sir Ryan, poignantly go through their rites of passage, I thought I'd step up to the plate, in the Spirit of the Knights...and introduce you to one of our English Summer drinking traditions.

June in England, is in full flood, sometimes literally...with our unique brand of rainstorms followed by blue skies ( and repeat...ad nauseum ). It is why we have emerald green trees and vegetation and carry umbrellas while walking around in polo shirts and shorts.. Such is the heady verdant almost moist decadent atmosphere when you sit in the sunshine at one of the many ancient riverside inns, that you invariably, become Bertie Wooster-ish, and dispense with winters heavy dark beers

and plump for something quintessentially Summertime in Middle England, that of the magical drink, Pimm's.

Pimm's is a brand of alcoholic beverages now owned by Diageo. Its most popular product is Pimm's No. 1 Cup, a gin-based beverage that can be served both on ice or in cocktails. The recipe of Pimm's No. 1 Cup is secret; it has a dark tea colour with a reddish tint, and tastes subtly of spice and citrus fruit.

Pimm's is most common in Southern England and is one of the two staple drinks at the Henley Royal Regatta and the Glyndebourne opera festival, the other being champagne. As a result Pimm's has the reputation of being a drink for the upper class.

Pimm's No. 1 Cup is the essential ingredient in the Pimm's Cup, which mixes one part Pimm's No.1 with three parts lemonade or lemon soda (sometimes ginger ale or Indian tonic water), ice cubes, borage leaves (nowadays a wedge of cucumber is usually substituted for this ingredient), mint leaves and slices of lemon, orange and strawberry.

There are five other

Pimm's products besides No.1. The essential difference among them is the base alcohol used to produce them:

Pimm's was first produced in 1823, by James Pimm, a farmer's son from Kent who became the owner of an oyster bar in the City of London, near the Bank of England. Pimm offered the tonic, (a gin-based drink containing quinine and a secret mixture of herbs) as an aid to digestion, serving it in a small tankard known as a "No. 1 Cup", hence its subsequent name.

Pimm's began large-scale production in 1851 to keep up with sales to other bars. The distillery began selling it commercially in 1859 using hawkers on bicycles. In 1865 Pimm sold the business and the right to use his name to Frederick Saywer. In 1880 the business was acquired by future Mayor of London Horatio Davies and a chain of Pimm's Oyster Houses was franchised in 1887.

The brand fell on hard times in the 1970s and 1980s. The Oyster House chain was sold and Pimm's Cups products Nos. 2 through 5 were phased out in the 1970s due to reduced demand. In 2005, Pimm's reintroduced Pimm's Winter Cup, which consists of Pimms No. 3 Cup (the brandy variant) infused with spices and orange peel. In 2006 the Pimm's Company brand was bought by Diageo.

Substitution: Pimm's may not always be available, especially outside the United Kingdom and the Commonwealth. Bartenders who wish to make a Pimm's Cup without its main ingredient usually mix one part gin with one part red Vermouth and 1/2 part to 1 part of triple sec or Orange Curacao.

So there you go... anyone out there in the colonies,ditch the ice cold Bud and Rolling Rock, pour a Pimms or similar and Lie back and think of England...