It's finally arrived. Sir Ryan of Warrick begins his journey from child to man, from warrior wanna be to warrior have to be. It's been a 2 day roller coaster of emotions, ranging from pride and excitment to fear and the feeling of your heart being ripped out of your chest as your only son is ripped from your life. It reminded me of the opening scenes of the movie "300", where the mother is held back in agony as she watches her son being taken away by a warrior to begin the process to ultimate manhood. That same scene played out in our home Tuesday as Sergent Ramsey came to pick up Ryan for his trip to the MEPS center in Louisville, Ky. 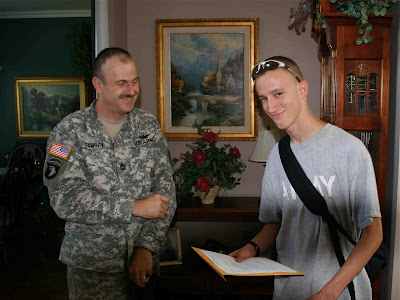 Here is Sir Ryan with Sergent Ramsey in the foyer of our home as he is handed his contract and asked one last time if this is what he wants for his life. He smiles with a combination of excitment and nervous energy, like so many young men centuries before him, ready to embrace the way of the warrior. It's a journey that starts in ignorance, but ignorance and innocence will soon give way to harsh reality and a new way of life, the way of the warrior, the way to manhood. 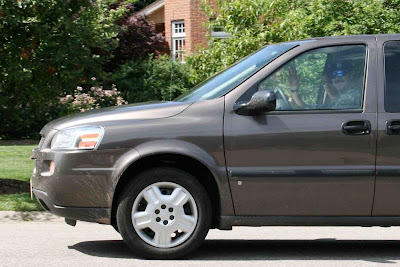 It's the wave goodbye as the eyes turn red through tears of joy and fear, knowing that Sir Ryan is soon to become a real Knight, a Red Knight of the 2nd Battilion, 81st Armor Regiment, 194th Armored Bridgade at Fort Knox. 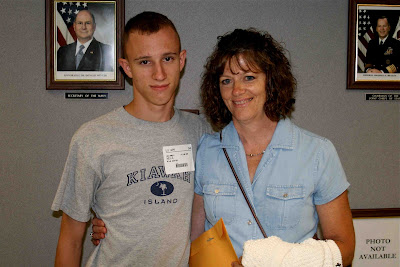 The next day we meet up with Sir Ryan at the MEPS processing center in Louisville before he swears in and ships out for Basic Training. Here is Sir Ryan and my wife, his mother, Lady Allwinky. 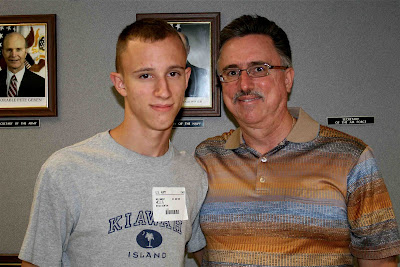 Sir Ryan and yours truly, Sir Hook, in one of our final embraces as father and son before he ships out. It's a surreal event to know that this is the last time I will see him as a teen age boy. Our next embrace he will be a man and a warrior. He wears his Kiawah Island T-Shirt, which is appropriate because we spent so many years in and around Charleston, SC asorbing its history and culture, and because this is where Lady Allwinky and myself will be going for the next few days to recover from yet another major event in our lives. My final words to him where, "Be strong! Be strong in body, mind and soul." Words I said as much for my own benefit as his. I become aware that the journey of the warrior never ends. 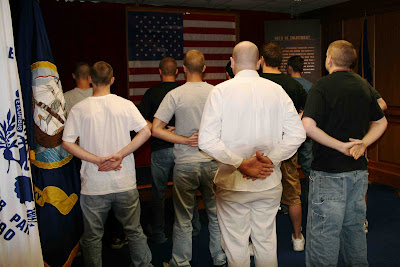 The swear in ceremony begins in the "Ceremony Room" at the MEPS center. Sir Ryan is in the front row to the left, a position he earns as "Group Leader" because of his rank as E3, Private First Class, from busting his ass this past four months in the Future Soldiers program. He already has earned the honor and responsibility of leading men. I am very proud and pray that he continues to grow in his leadership roll. 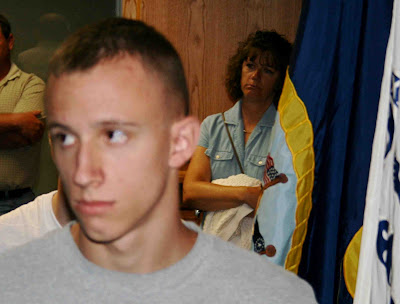 I was invited by the Captain to come up front to take a few shots during the swearing in ceremony. This was a profound shot for me as Sir Ryan lets the seriousness of this moment sink in and Lady Allwinky wears the face of a grieving mother in the background. 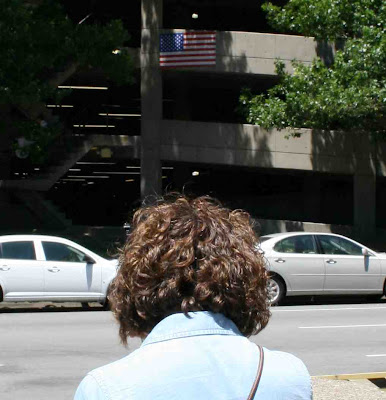 The gate shuts in our face as we watch our son and the other young men march off to the bus that takes them to Basic Training. The gate reminds me of the seperation that we now must feel and deal with. A barrier between a child and a man, the mother and child. A no man's land, to coin a WWI military phrase, that only Ryan can now travel alone. I follow Lady Allwinky as she is overcome by the moment and snap this photo, a mother's bowed head under the American Flag as she mourns the loss of her son's innocence while the nation gains another warrior-son. I pray for strength for us all and for our country to truly honor the lives of these brave young men by using them wisely and sparingly in our defense. Red Eyes

follow the Red Knight as he rides towards his destiny.