More Beer Recipes (IF you dare).

The other night's trying of the new Budweiser product (beer, clamato, shellfish...) got me wondering what other people are out there trying.

Here are some other beer mixes and cocktails.

Pour a shot of Godiva Dark Chocolate liqueur into a pint glass. Pour 1/2 pint of Guinness on top.

-- These recipes provided by Lauren Sanyi at Liberty Tap Room.

Just drink it casually -- it's meant to refresh.

-- This recipe was provided by Mike Riiters at The Bohemian.

1/2 pint Japanese beer such as Sapporo or Kirin

drop in shot of hot sake

Drink it as fast as possible or your beer will get hot.

-- This recipe provided by Karen Thomson, bartender at Murasaki.

Now, I've personally always love a nice porter with my steak off the gill, but Meat Beer? 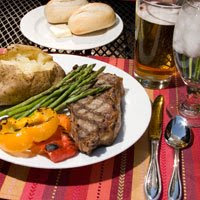 Liquify the steak, mix it with the beer, and you'll have dinner in a glass, a beer with the chunky residue of a steak floating to the surface. The varieties will include: Bacon Cheesburger Lager and Hamburger Helper Ale.

And finally, something called Cock Beer from several sources:

Take 10 gallons of ale and a large cock, the older the better; parboil the cock, flay him, and stamp him in a stone mortar until his bones are broken (you must gut him when you flaw him). Then, put the cock into two quarts of sack, and put to it five pounds of raisins of the sun - stoned; some blades of mace, and a few cloves. Put all these into a canvas bag, and a little before you find the ale has been working, put the bag and ale together in vessel.

In a week or nine days bottle it up, fill the bottle just above the neck and give it the same time to ripen as other ale.

So, fellow Knights, start cooking and mixing. Or maybe not. I think I'll stick to the pure form.